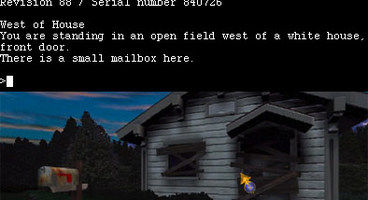 As the MMO universe continues to digest its daily intake of power-craving gamers, it's interesting to hear that Dublin-based Internet game specialists Jolt Online Gaming are ready to revive the early world of Zork.

In collaboration with publishing giant and owner-of-Zork-rights Activision, it's said that Legends of Zork will be a "persistent online adventure" and "casual MMO" that is "playable from any internet browser." In an intriguing twist, it seems functionality on the iPod is looking likely, as the application continues its quest to become a serious gaming machine.

After the fall of the Great Empire's economy and plummeting of stock markets, players can expect to enter a subterranean world infested with looters and deadly treasure hunters. As the real-life economy crisis worsens, it's humorous to understand that you'll start Legends of Zork as a recently redundant salesman who is seeking a life of prosperity and adventure. Hey, who said the MMO genre was all about fantasy?

Jolt Chief Dylan Collins said, "As a complete Zork geek, I'm very proud to be releasing this title. Anyone who plays MMOs will definitely like to spend some time with Legends of Zork while they're taking a break or browsing around the web. It's very addictive."

As a legendary series amongst fans of a certain age, Zork became famous after landing on home computers towards the end of the 1970s. Starting life as a project written by hackers at the Massachusetts Institute of Technology, it'll be interesting to see if the Jolt-Activision partnership can replicate the original success publisher Infocom received.

For further updates, visit the Legends of Zork website for the latest news and information on the upcoming beta test.