15 July 2009 | By Simon Priest
The upcoming new content for Bethesda's Fallout 3 will have our vault dweller in orbit over the irradiated ball called Earth, aboard a huge alien mothership, this August 3rd.

Space bound adventurers will be in a "desperate bid to escape", as the menacing aliens look to get their clutches on you. It has alien weaponry, master plans to thwart and more...

"Meet new characters and join with them in a desperate bid to escape the Aliens’ clutches. To do so, you’ll wield powerful new weapons, like the Alien Atomizer, Alien Disintegrator, and Drone Cannon, and deck yourself out in brand new outfits, like the Gemini-Era Spacesuit and even Samurai Armor."

• Find and exploit new and destructive alien technology, like the Alien Atomizer and Drone Cannon.

• Explore the vast Mothership and learn the secrets of the Aliens’ master plan.

• Thwart the Aliens’ attempt to stop your escape, and take over the Alien ship before it wreaks havoc on the unsuspecting Earth below.

• Fight against the Alien Invaders, their robot drones, and turn their own horrible experiments against them.

• Ally yourself with an unexpected array of characters, both from the Capital Wasteland and from Earth ’s past.

Fallout 3: Mothership Zeta is releasing on Xbox 360 and PC this August 3rd for 800 Microsoft Points, with a later date planned for the PS3. Looking forward to this probing appointment? 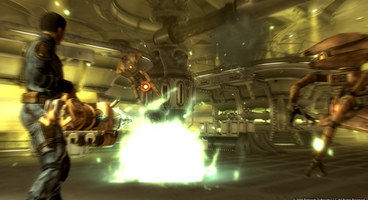 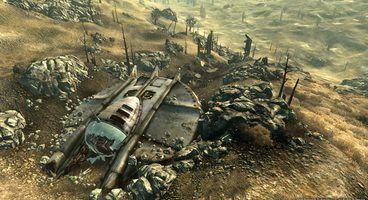