16 December 2009 | By Richard Walker
So, it’s been out for a few months now and has boosted sales considerably thanks to a long overdue price cut. The PlayStation 3 Slim is Sony’s ace in the hole and a shoe-in to be a big hit this Christmas.

Sony couldn’t have timed the PS3 Slim any better, despite it coming earlier in the console’s life cycle than ever before - a whole year earlier than the PS2 Slim launched and two years earlier than Sony release the diminutive PSone. Knocking 50GBP off the price in the run up to Christmas will not only drive further sales of the console itself but will likely help shift stacks of games and Blu-rays before and after Santa crams his fat arse down people’s chimneys the world over. 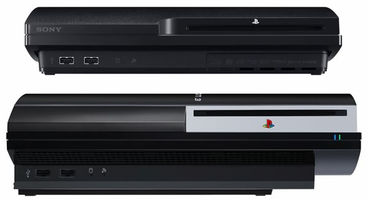 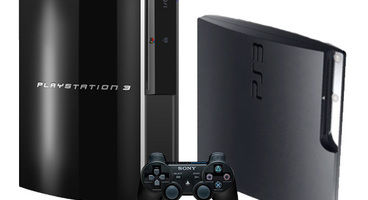 Squatter in stature, deeper lengthways and considerable less wide than it’s daddy, the Slim still looks slick despite the inferior matt finish and the absence of shiny, silver trim. Gone are the touch sensitive on/off and eject buttons replaced by proper, physical buttons that you have to actually press. They’re nicely understated and flush in their recesses though, so the PS3’s trademark sleek lines are thankfully maintained.

The new logo sits on the top, inscribed into the textured plastic surface and that’s really all you need to know about the aesthetics of the Slim. Standing it on its side is a pain thanks to a narrowed base, which now (stupidly) requires a stand lest it topple over. It’s much lighter now too, making lugging it to granny’s house this Christmas, a lot easier.

Sony has decided to stick to its guns in design terms retaining two USB ports and the lack of memory stick compatibility from the first PS3 redesign, which saw the original PlayStation 3’s features pared down considerably. Let’s not forget that upon its 2007 launch, the PS3 had backwards compatibility, memory card support, four USB ports and a premium quality finish that almost went some way to justifying that initial 425GBP price point.

At around 250GBP, perhaps the best thing about the PS3 Slim is not the desirable redesign, the attractive price tag or the reduced weight, but the massive hard drive, which is now available in 120GB and 250GB (for an extra 50GBP) flavours. As Sony’s extra services have finally started being delivered to consumers, that extra capacity is going to come in extremely handy, especially if you want to record hours of programmes using PlayTV, install games or purchase loads of PSN titles.

And now, with the new video store, which allows you to rent or buy movies, there’s an even greater need for that added HDD capacity. That is assuming you’re an avid movie fan keen to fill your hard drive with films. The service is as slick and user-friendly as you’d expect, working in exactly the same way as the PlayStation Store interface but with movie content instead of games. You can rent movies in both standard and high definition with relevant and reasonable price tags attached to each. Buying movies is a different matter however as you can only currently make SD purchases for roughly the same price as a boxed copy you’d normally pick up at a high street retailer. 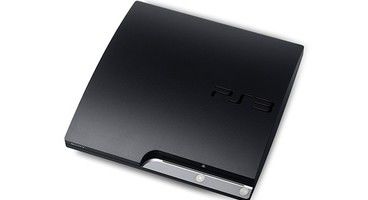 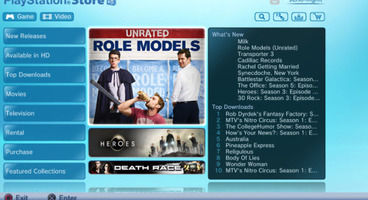 At the moment, the option to buy a movie may seem a bit pointless therefore, but the ability to port them across to your PSP is a nice touch that adds extra value to your purchase. And the selection of movies on offer is pretty staggering, especially considering the service is still relatively new to PSN. More and more titles are being constantly added too, in tandem with their Blu-ray and DVD releases and you can download a movie from the comfort of your sofa and be watching within moments.

There’re also two-for-one deals occasionally running, the first of which is the rubbish Da Vinci Code movie, which you can purchase with its equally rubbish sequel, Angels & Demons for a discount price. Praise be! Still, if Tom Hanks and his inexplicable hair aren’t quite your cup of tea, then there’s bound to be more two-for-one deals cropping up in the near future. The smart money has to be on a Transformers two-pack, surely.

Going back to the PS3 Slim itself, functionality and interface predictably remain the same, so the XMB is still the menu navigation method of choice for the PlayStation Store, Home and so on, which is just as well really. It didn’t really need to change since it has always worked perfectly fine, even if it is a little cold and sterile next to the colourful Xbox 360 interface.

You might recall the PS2’s advertising slogan of ‘The Third Place’, but few could have predicted that years later Sony’s follow-up console would literally be in third place. And in the current console race, it had looked fairly certain that the PS3 would retain the bronze medal until the end of its cycle. But with the Slim redesign and addition of genuinely superb video services such as BBC iPlayer and the PSN Video Store, PlayStation 3 is looking like it could well be a real contender for 2010, almost three years after its original launch. 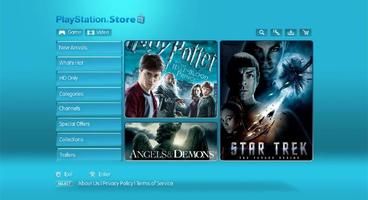 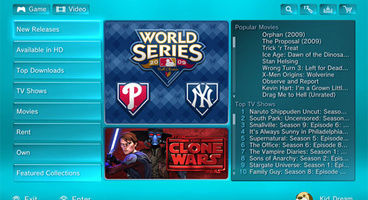 Add for instance, the numerous platform exclusive games for 2010 to the growing list of pros versus cons as to why a PS3 might be a worthwhile purchase this Christmas. Heavy Rain, God of War III, Final Fantasy Versus XIII, DC Universe Online, The Agency, MAG, Gran Turismo 5 and White Knight Chronicles for starters. And that’s not forgetting also Sony’s exclusive winter big hitters, Ratchet and Clank: A Crack in Time, Uncharted 2 and erm, EyePet(?)

It’s nice to finally see Sony’s console finding its feet and not having to rely on its integrated Blu-ray playback facility to bolster sales. The PS3 is now a console that is genuinely more than worth its price tag and as such, it should almost certainly be in your letter to Santa if you don’t already own one.