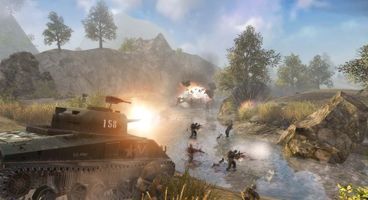 505 Games and 1C Company are pleased to announce that the single-player demo for World War II strategy title Men of War is now available to download. It gives a first taste of the epic campaign ahead of the game's PC release on 27th February.

The demo features the entire opening stage of the Russian campaign, which sees a small unit from the Red Army taking on the might of the Germans. This initial mission helps players to get to grips with the controls before culminating in a tightly fought battle between a Russian tank and a convoy of German vehicles.

There’s also an opportunity to try out Men of War’s “direct control” feature during the demo. This enables you to manoeuvre units using the directional keys, rather than pointing and clicking. You can get behind the controls of a tank to smash through obstacles, crush soldiers under your tracks and fire armour-piercing shells at enemy placements.

Men of War takes place across the globe during the height of World War II and features four different armies – Russia, America, Germany and the other Allies - each with their own unique units, vehicles and missions. From the Russian missions starring two student comrades innocent to the horrors of war, players are soon catapulted into massive battles with dozens of units under their command.