18 February 2009 | By Richard Walker
From their humble beginnings making coin-operated amusements for the American military in the 40’s to their move to Tokyo in 1951 under the name SErvice GAmes - later abbreviated to SEGA, the moniker we all know and love today (cheers, Wikipedia) – Sega have made hundreds of revolutionary games over the past 20 or so years. Although they’ve been around for almost 70 years now, the Sega brand has been through a lot over the years from massive hardware success with the Master System and Mega Drive to the beginning of the end with the much maligned Saturn. With Sega Mega Drive: Ultimate Collection on the horizon (it’s out this Friday), we thought it was high time we gave a hearty salute to the games company responsible for so many great memories and more importantly, some truly legendary games. So read on Sega fans and check out our all-time top ten Sega hall of famers at the bottom of the page…

For me my relationship with Sega has been a very significant one, starting my life with videogames at the age of seven when I was given a Master System II for my birthday back in 1989. I did play many videogames before on various formats including the Atari 2600, ZX Spectrum and Commodore 64, but at the time the Master System seemed like the cutting edge in home gaming. At this point I hadn’t even played the Mega Drive, so Alex Kidd in Miracle World seemed like the best looking game I’d ever had the pleasure of playing at home. It was rock solid and hugely frustrating, but I loved it all the same. Games like The Ninja, Hang-On, OutRun and of course the burgeoning Sonic the Hedgehog series cemented my love for all things Sega, moulding me into one of those obnoxious kids who hated Mario and Nintendo for no good reason. I’d avidly read all of the Sega mags I could afford each month like Mean Machines Sega, Sega Power and Sonic the Comic, digesting anything and everything I could about videogames on Sega’s four consoles at the time – the Master System, Mega Drive, Mega CD and Game Gear. 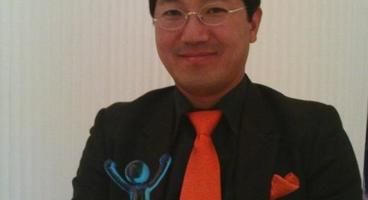 Yuji Naka, (seen here holding one of the avatars from his latest game, Let’s Tap) felt Sega were wrong to stop manufacturing hardware. 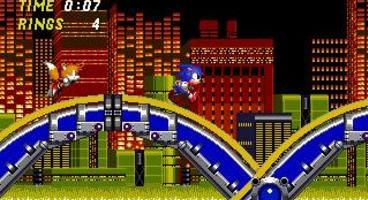 Soaking up the hype for Sonic 2 by watching TV shows like GamesMaster was all the rage back in ‘92.

Years later I finally got my paws on the Mega Drive II, the pared-down re-design of the bulky original, which only made my passion for all things Sega even stronger. Games like Golden Axe, Revenge of Shinobi, Alien Storm, Altered Beast, Sonic the Hedgehog, Road Rash, Desert Strike, Probotector, Mega Bomberman, Dynamite Headdy, Kid Chameleon, Rocket Knight Adventures and Ecco the Dolphin fuelled long evenings and weekends playing games. More obscure titles like Flashback, Chakan The Forever Man, Eternal Champions, Onslaught and Fatal Rewind brought added mystery with their weird cover art and overtly surreal style that rendered the stories utterly incomprehensible. Gaming during the Sega heyday was filled with loads of strange little idiosyncrasies, bizarre boss characters and sickly nightmarish pixellated landscapes, but it was all part and parcel at the time. We never even learned the reason why EA Mega Drive cartridges were larger than all the others and had a yellow chip set into their side, so we were never going to know what the hell Chakan or Dynamite Headdy was all about. All that really mattered was that no longer did we have to wait hours for a game to load. All we needed to do was shove a cartridge into a slot before being whisked away to a land of pixel heaven.

Bleary-eyed nights staying up until 4am trying to work out what to do - whether it was planting a bomb in some strange organic alien fortress in Flashback or suffering through a lurid day-glo acid trip in Ecco – were commonplace and although some of these games may not have been made by Sega, it was on their console that I discovered and enjoyed them. Even though Nintendo’s SNES was the superior console, boasting a massive library of brilliant games, I refused to see sense as school friends shouted about playing an arcade perfect version of Street Fighter II and the many virtues of the FX chip and Mode-7 in games like Contra 3 or Starwing on Nintendo’s 16-bit machine. I consoled myself with the prospect that the wait for the Mega Drive version of Capcom’s fighter would be worth it and that I didn’t need FX chips and Mode-7 trickery for my games. And so what if SF II on the Mega Drive turned out to be inferior to the SNES version, with its blurry graphics and terrible sound. I didn’t care.

With the Mega Drive, Sega were at the very top of their game (hence the constant re-issues of the back catalogue) yet the Mega Drive struggled in its early years, initially outsold by the NES until the arrival of a certain spiky blue hedgehog with attitude turned things around. Suddenly Sega had an appealing mascot to usurp the dull Alex Kidd and actually challenge Mario in the cool console mascot stakes. Numerous pretenders like James Pond, Cool Spot, Rolo, Zool and Bubsy the Bobcat all attempted to replicate Sonic’s success, but ultimately emerged as pale imitations.

When the Saturn eventually saw release closely following the dismal 32X add-on for the Mega Drive, I found myself coaxed away from the Sega fold by Sony’s clearly superior PlayStation. In retrospect, I feel quite bad and ended up missing out on some great games such as NiGHTS into Dreams. Later ignoring the Dreamcast in favour of waiting for the PlayStation 2 to launch was another betrayal that I committed towards a company that had given me so much back in the late 80’s and 90’s. Looking back, the Saturn wasn’t the best console and it had relatively few great games compared to the PlayStation, but the Dreamcast was a console way ahead of its time that really didn’t deserve to fail in the way that it did. That it’s failure spelled the end for Sega’s hardware production is one of gaming’s biggest tragedies as there were so many great titles that found their way onto the ill-fated beige box. Soulcalibur, Resident Evil: Code Veronica, Shenmue, Sonic Adventure, Jet Set Radio, Space Channel 5 and Chu Chu Rocket! are just some of the games that called the Dreamcast home and are still remembered as classics. Even today, Sega alumnus and co-creator of Sonic Yuji Naka steadfastly believes that Sega should have continued to produce hardware and he’s absolutely right. 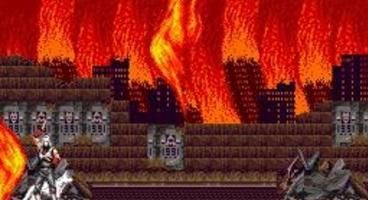 It may have been mostly grey, but Shadow Dancer still represents the height of 16-bit ninja chic. 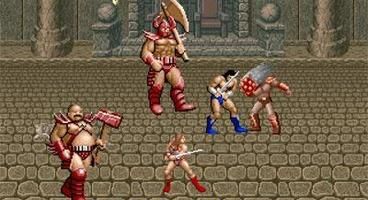 Playing Golden Axe never gets old. It’s as close to a Conan the Barbarian game you can get. Except for Conan on PS3 and Xbox 360 of course.

Nonetheless, Sega’s legacy lives on in the games that they currently bring to the current-generation of consoles. They may not be in the hardware race anymore, but Sega are still responsible for some of the finest games ever to grace plastic chip-filled boxes everywhere.

1.Streets of Rage II – A personal favourite that I will always hold in high regard. Finishing it seven consecutive times in one day with a friend should lend some insight into how obsessed I was with this game. Axel is still the best character if you ask me and Yuzo Koshiro’s soundtrack is still genius.

2.Sonic the Hedgehog 2 – Most will argue that the original Sonic game was the best, but I respectfully disagree. Everything about Sonic 2 was bigger, better and faster – so much so that sometimes the screen couldn’t keep up. With more variety in the stages, more inventive bosses and a smorgasbord of hidden extras and cheats, to this day I still maintain that this is the best Sonic game ever made.

4.Golden Axe – Cheesy fantasy stuff for sure and outrageously camp to boot, Golden Axe nevertheless provided some great co-op laughs battling through dragons, knights, skeletons and goblins on a quest to retrieve the titular axe from the evil clutches of Death Adder.

5.Shenmue – Although I only ever had the chance to play this very briefly, Shenmue stands out as another example of Sega’s innate ability to innovate and experiment with new ideas. Once again Shenmue was something fresh and original for Sega, inspiring a sequel that found its way onto the Xbox. Its spirit lives on in Sega’s violent Yakuza series on PS2.

6.Shadow Dancer – Joe Musashi returned once again for this entry in the Shinobi series, aided by his white dog, Yamato. The coin-op version found its way onto the Master System and was a tad on the naff side. The Mega Drive adaptation was completely different with some striking visuals and memorable set pieces. Climbing the Statue of Liberty with an attack chopper bearing down on you was both incredibly cool and hard as nails.

7.Altered Beast – Barking mad and great fun because of it, Altered Beast saw your weedy character ‘power-up’ into a raging beast that changed with each level. Wolf, bear, dragon – they’re all good.

8.OutRun – Worthy of mention simply for its arcade pedigree, OutRun pioneered the trademark for Sega's visual style, with those bright blue skies and bold striking colours. Peerless. Coast 2 Coast was a brilliant reinvention and well worth a look. 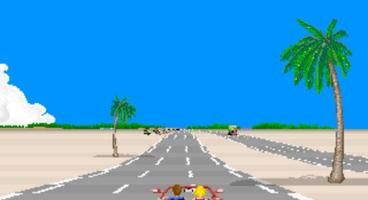 OutRun – one of the finest coin-ops ever to swallow copious amounts of our pocket money. 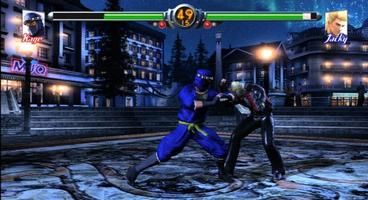 Virtua Fighter 5 is without a doubt the most sadistically hard and overly technical beat ‘em up we’ve ever played. Still love it though.

9.Virtua Fighter 5 – Say what you like about the predecessors - they’re all great – but for my money the latest in the series is the most eye-poppingly gorgeous and downright playable of the bunch. Simple to play, devastatingly tough to master, Virtua Fighter 5 is as unforgiving a fighting game you’re ever likely to find.

10.Ecco the Dolphin – “How high in the sky can you fly?” Another Sega title that began in a perfectly sane fashion before rapidly descending into complete and utter gobbledegook. Floating alien heads, insurmountable boss battles and eye-hurting stages that could drive the most patient gamer completely insane, Ecco was a deeply weird game that demanded perseverance to make it to the end. Suffice to say we didn’t get there.

Granted, most of these are Mega Drive games, but then no other console since has meant so much to me. Without it, I probably wouldn’t be working on this site, writing this stuff. So, here’s to Sega. Thanks for everything.

Disagree with our top ten Sega games? Why don’t you leave a comment with your own top ten?