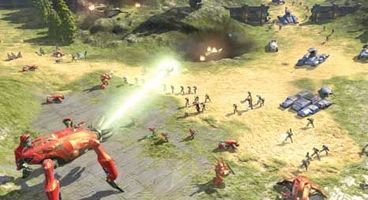 Microsoft announced today that Halo Wars has reached more than one million sales worldwide, making it the most sucessful real-time strategy game on any current generation console.

LONDON – 19th March 2009 - Microsoft today announced that sales of “Halo Wars” have reached more than one million units worldwide, making the exclusive Xbox 360 title the best selling real-time strategy game on any current generation console. With a revolutionary control scheme designed expressly for the Xbox 360 controller and a riveting story that takes “Halo” fans deeper into the “Halo” universe, “Halo Wars” is breaking new ground for the strategy genre by introducing a new wave of fans to strategy games and reminding existing fans why it’s so fun.

Set in the year 2525, “Halo Wars” takes players on a perilous journey through the famed “Halo” universe. As players take the command seat in the early, epic battles between the UNSC and Covenant, they will begin to unravel events 20 years before “Halo: Combat Evolved” that shaped the franchise into what it is today.

Since the game’s release throughout Asia on February 26 and subsequent launches in Europe and the Americas, fans around the world have been taking full advantage of “Halo Wars’” rich Xbox LIVE gameplay. To date:

· There have been more than 2.6 million multiplayer matches played

· On average, more than 200,000 “Halo Wars” fans have taken up arms in battles between the UNSC and Covenant each day

· For more statistics and game information, fans can visit the official stats page at: http://www.halowars.com/stats/globalstats.aspx

But these initial explosive battles in “Halo Wars” are just beginning. Microsoft is working closely with partner and newly formed studio Robot Entertainment, which is comprised of “Halo Wars” and “Age of Empires” veterans from Ensemble Studios. More Halo Wars content is being prepared, so stay tuned.