19 June 2009 | By Simon Priest
There are numerous complaints circling that Terminal Reality's Ghostbusters on PS3 is visually inferior to the Xbox 360, it has lower resolution.

Terminal has responded saying it's "softer due to the 'quincunx' antialiasing filter" and it is "at about 75%" of the 360's resolution. They "cannot directly compare" without being scaled.

"For the record, the PS3 version is softer due to the 'quincunx' antialiasing filter and the fact we render at about 75% the resolution of the 360 version," a Terminal spokesperson told Joystiq.

"So you cannot directly compare a screen shot of one to the other unless you scale them properly. The PS3 does have less available RAM than the 360 – but we managed to squeeze 3 out of 4 textures as full size on the PS3."

The results of the PS3 version of Ghostbusters fly in the face of Terminal's previous boasting, that they are "one of the few developers who love the PS3 and have a great time with it. We have great technology for the PS3 and we want to show it off," said Mark Randel last year.

So, no multiplayer or DLC for the PC version and the PS3 copy is visually subpar to the Xbox 360 Ghostbusters. Looks like European gamers are screwed unless they import?

Click here to see the Lens of Truth's dissection of the PS3-360 Ghostbusters experience - prepare to be quite shocked at the difference in quality. No, really quite shocked. 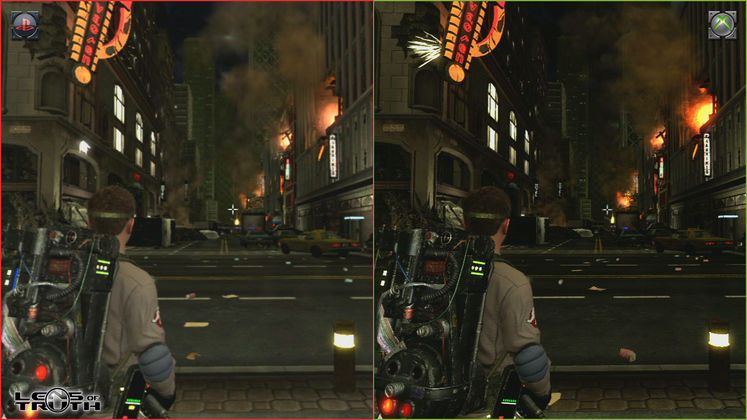 "Graphically this was a very impressive game, if you’re playing the Xbox 360 version that is." - Lens of Truth