Modern Warfare 2 almost had T-Virus like outbreak, some aliens too 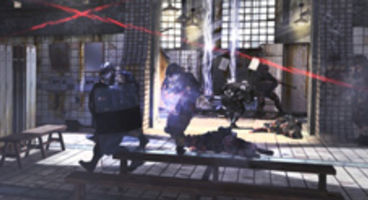 Professional guy with pen, Jesse Stern, reveals when writing began for Modern Warfare 2 there were some "outlandish things" thrown around.

Things like "outbreaks, viruses, chemical warfare" all got lost to their "stumbling" into real life events, which was "honestly unintentional."

"In the beginning we talked about having things in Modern Warfare 2 like outbreaks, viruses, chemical warfare, and even outlandish things such as aliens and the living dead," revealed scriptwriter Stern, speaking with GamePro.

"We worked our way through it before we finally ended up with a more grounded version of the real world as it's depicted in Call of Duty: Modern Warfare 2."

"And as we were kicking around scenarios for conflict, we kept stumbling into things that were happening in real life, which was honestly unintentional." Call of Duty fans love their undead, as evidenced by the huge hit Treyarch got with World at War.

Stern also touched on the airport scene, and what was their goal behind it. "We've been catching a lot of criticism for that and a lot of praise as well. People have really strong reactions to the airport scene and it's been fascinating because we all wanted to make it something that would be upsetting, disturbing, but also something people relate to."

"Ultimately, our intention was to put you as close as possible to atrocity. As for the effect it has on you, that's not for us to determine. Hopefully, it does have an emotional impact and it seems to have riled up a lot of people in interesting ways."

"Some of them good. Some of them bad," he continued. Did you test your humanity with Modern Warfare 2's airport scene, videogamer?