The Punisher: No Mercy hits PlayStation Store on July 2nd 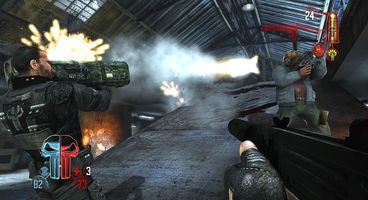 ZEN Studios confirmed today that The Punisher: No Mercy will be released on July 2nd, 2009 through the PlayStation Store for $9.99.

"Our team has been working long hours to deliver a first-person shooter experience that will live up to the Punisher name," said Zsolt Kigyossy, managing director for ZEN Studios. "With awesome characters, a customizable system, and fast-paced multiplayer action, No Mercy is breaking ground in the digital space. For comic and shooter fans alike, this is a must-have game for the summer."

Powered by Unreal Engine 3, The Punisher: No Mercy was designed with fast-paced online multiplayer FPS action in mind. The game allows players to choose from an eclectic mix of Punisher allies and villains. Battle arenas span from shipyards rife with contraband to the “birthplace” of the Punisher’s archenemy, Jigsaw, and up to eight players can blast away at each other in a variety of solo and team-based missions.

Click here for more information on The Punisher: No Mercy...