Fable II dog saved by fan "furore", won't be so "merciful" next time

24 August 2009 | By Simon Priest
Peter Molyneux has said the reason the first DLC for Fable II, Knothole Island, let gamers bring back their pooch was because of the "hate mail" they received.

The devs relented and let players optionally bring them back or not, but they won't be "as merciful as that" in the future warns Molyneux. Fable III has the hero take rule of Albion.

At the end of Fable II the hero had to make a choice, which could result in the faithful mutt not reappearing to accompany you anymore. Fan discontentment over this grew "to such a furore" they added a little canine crypt to Knothole Island, to resurrect the dog.

Molyneux said last year that someone sent him "a personal email saying that I deserved to die, and that he would never buy another game ever again unless I release a patch to resurrect his dog," but also got others thanking him for the choices in the game.

"Don't expect us to be as merciful as that in the future," said the Lionhead boss, as possibly a joke or not. Fable III was announced at GamesCom and will release late next year.

Played Fable II and made the heart wrenching choice of not bringing back your dog? 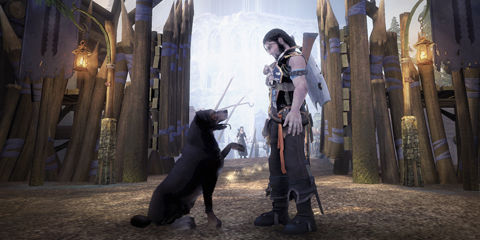