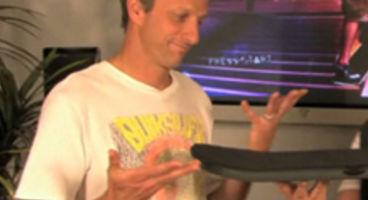 Skateboarding icon Tony Hawk revealed Activision has Ride already setting up for a sequel, because they've only just "tapped" the tech.

Tony Hawk: Ride comes with a skateboard peripheral, weighing in at $120 in the US. Sequel needs "seamless way" from vert to street mode.

"We have already started that process, but who knows what the future holds. I've never had a master plan, especially with our old series, of how many we could do, or how far we could take it," Hawk told GameSpot, asked when work begins on Ride 2.

"It really was all about the fans and the console technology. ... As far as I'm concerned, it's all systems go with trying to make at least a sequel for this, because I feel like we've only just really tapped what's possible with this technology."

The sporting legend already has his own ideas for things developer Robomodo needs to work on for a sequel to the new Tony Hawk reboot. "I think that there are certain ways to play the game that we could definitely improve on in a sequel," he said.

"Especially the way that you transition from the vert mode to the street mode. I'm sure there's more of a seamless way to do that, but we had to separate it for this first one, just because we wanted to get it finished and get it tight." Now come on Mr Hawk, we all know in the first game the player can't swim as that happens in the sequel - it's gaming 101.

He even sees snowboarding and surfing in the future for the latest peripheral add-on for consoles, as right now it's only good for Tony Hawk: Ride. He said it was "up to Activision and myself as to what we do with this next and what kind of games we create."

"I think that the first priority, beyond skateboarding, would be snowboarding because that would lend itself" to the board a little bit easier than other genres, "and beyond that I'd love to do a surfing game." Robomodo already has ideas beyond skateboarding.

Are you looking to get yourself some Tony Hawk: Ride? It costs a small bomb.