This marriage will be presided over by BioWare's Ray Muzyka, with fellow partner in crime Greg Zeschuk as Creative Officer. Mythic staffers "can't even fathom" Jacobs leaving them.

"EA is restructuring its RPG and MMO games development into a new group that includes both Mythic and BioWare. This newly formed team will be led by Ray Muzyka, co-founder and General Manager of BioWare," revealed the Warhammer Online website.

"With this change, Ray becomes Group General Manager of the new RPG/MMO studio group. BioWare’s other co-founder, Greg Zeschuk will become Group Creative Officer for the new RPG/MMO studio group. Rob Denton will step up as General Manager of Mythic and report to Ray. BioWare’s studios remain unchanged and continue to report to Ray."

Meanwhile the biggest news perhaps is that Mark Jacobs is leaving the EA group, which has some Mythic developers rather stunned, and even suggest he may have been elbowed out. "People are shocked and in disbelief about Mark leaving," one employee tells Massively.

"But they're also excited to be working with BioWare. I can't even fathom Mark leaving a company he loved so much, it was his life. Personally, I can't see that this is voluntary in any shape or form." The Mythic team were told in small groups and assured no one would be losing their jobs, and that the studios won't actually be converging.

Generally they seem quite upbeat over the whole affair, and even look forward to possibly adding "muscle" to BioWare's Star Wars: The Old Republic MMO. "...Mythic will continue to go on without their fearless leader is probably an accurate assessment," said a Massively source.

Surely BioWare taking the reins over this new RPG/MMO group is nothing but a good thing, right? 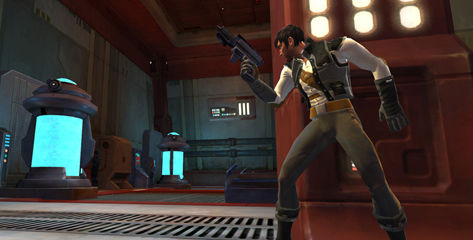