Lord of the Rings: Conquest Heroes and Maps Pack Released 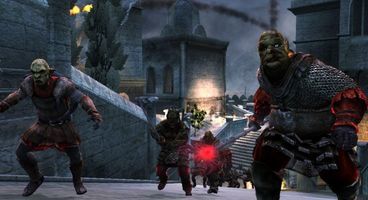 Pandemic Studios today announced the release of new downloadable content for The Lord of the Rings: Conquest for the PlayStation 3 and Xbox 360. The new Heroes & Maps Pack includes two new full multiplayer maps, two new Hero Arenas and three additional heroes. The pack will cost 800 Microsoft Points on the Xbox Live Marketplace and $9.99 at the PlayStation Store.

"The Lord of the Rings universe offers so much variety and depth and we wanted to pass more of this incredible experience to fans," says Michael Saladino, Senior Producer at Pandemic Studios. "The Heroes & Maps pack gives gamers a chance to experience even more intense battles with their friends online and explore more of Middle-earth."

By downloading the Heroes & Maps pack, players will get to choose from three new classic J.R.R. Tolkien characters to play as, including the massive Gothmog, the heroic Boromir and the powerful Half-elven Arwen, bringing the total number of playable characters to over 20. Players can battle as these heroes and villains in two new multiplayer maps, all playable in any of the game’s three game modes, Team Deathmatch, Conquest and Capture the Ring, taking players to the hot lava fields in the Battle of the Last Alliance or the shady forests of Amon Hen.

Also included are two new Hero Arenas, Minas Tirith and Weathertop. This new game mode offers players an additional extension to The Lord of the Rings: Conquest experience where they can engage in intense, online battles in a small theatre of war. This mode gives fans a chance to see the heroes and villains of the universe settle long-time battles and rivalries one on one. The previously released Hero Arena content pack including the first two arenas is still available as a free download on Xbox LIVE Marketplace and the PlayStation Network.