27 July 2009 | By Simon Priest
Comic book creator Bryan Lee O'Malley has revealed Ubisoft Montreal to be developing a videogame based on his slacker adventures with Scott Pilgrim.

A movie is already being made but it's unclear if the stars will lend themselves to the project. It's to have "an old school video game feeling", so it's likely a scrolling beat-'em-up.

"Universal hooked up with a number of different publishers, and we ended up going with Ubisoft. We talked about having an old school video game feeling like the books," O'Malley told Comic Book Resources. "That's something we talked about with Universal, and Ubisoft has more to do with that idea, that aesthetic. We're happy about it."

A lot of material that can't fit into the upcoming flick will be included in the videogame. "It's still in the really early stages, but we're talking about having lots of characters, lots of Easter Eggs for readers of the books – a lot of stuff that couldn't fit into the movie but is more suited to the game. That's what I'd like to see and what we're working on."

Who the heck is Scott Pilgrim?

"Scott Pilgrim is a 23-year-old guy living in the big city with his gay roommate, just trying to make his way in this crazy world," blurbs the official site, and he "likes the new girl in town, Ramona Flowers, but to win her heart, he has to defeat her seven evil ex-boyfriends. Wait, what?"

So far five volumes of Scott Pilgrim have been published by O'Malley - a mix of manga style art and completely over-the-top epic battles and craziness, therefore the game is unlikely to be boring. 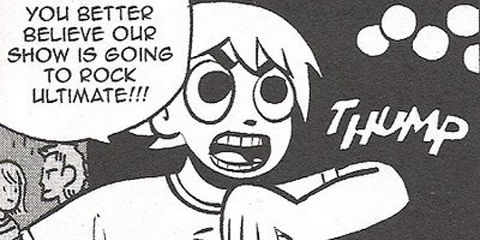