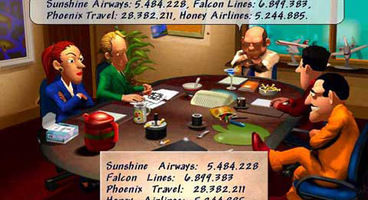 Kalypso Media announced today the acquisition of the worldwide name and publishing rights for Airline Tycoon II from Spellbound Entertainment. Kalypso is planning to release the sequel in the first quarter of 2011, with development being managed by its in-house studio, Realmforge.

"Following the success of Tropico 3 and the development of future titles including MudTV and Patrician, we are thrilled to be bringing another hugely popular and respected brand to market. Airline Tycoon II will further strengthen our line up for the first quarter of 2011," says Simon Hellwig, Global Managing Director Kalypso Media Group.

Stefan Marcinek, Global Managing Director Kalypso Media Group adds: "Fans of the original title have been waiting for the next installment for a long time, and we’re excited to reveal that our own studio Realmforge is currently developing the sequel. Our goal is to create a game that delivers new challenges without losing the original Airline Tycoon charm. We don’t want to disappoint the community!"

"It's a dream come true for all the Airline Tycoon fans who signed the online petition for a sequel," commented Armin Gessert, CEO of Spellbound Entertainment AG. "We are certain that with Kalypso Media we have found the perfect partner to continue the great series with Airline Tycoon II."

Airline Tycoon II lets the player take the reins of an airline which they must bring to financial success. Players will manage a staff, buy new airplanes and open up new air routes. They will also deal with crabby passengers and engage in espionage and sabotage against their competitors.