Because of their heavy interference the shows were "a half-step removed" from something off the Disney Channel. Gunn "saw them as the future" but not so much now, still loves Xbox games though.

While being promised "complete creative freedom", Gunn had his creations soon falling victim to conservative boardroom politics, and a lot were cut or rejected.

"I still love Xbox gaming, but I think their original content plans are DOA, precisely because of situations like the experience I and some of the other directors had on the Horror Goes Comedy series," blogged the director.

"The top downloaded content on XBox is South Park! But Microsoft wouldn’t let us get close to the extremity of that material, so I don’t know how in the world they planned to create their own successful original content."

"It’s a shame. I really think XBox could have been their own Network, as well as a gaming console, DVR, and way to buy movies. I saw them as the future," he continued.

"But because of the small-mindedness of the Microsoft executives, who preemptively censored a lot of our scenes for fear of freaking out stockholders, they crushed the potential for something that would have kept them relevant for a long time to come. It seems, instead, the visionaries have landed at other companies."

Too bad we'll never get to see "the most balls-out, f*cked up thing" Gunn ever shot as a director; HUMANZEE! "XBox saw it and freaked out!" 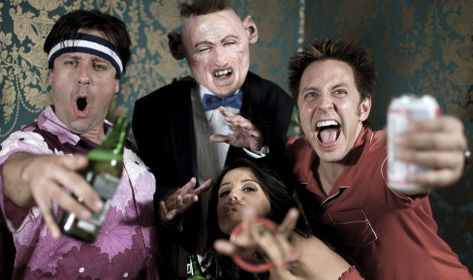