Darwinia+ heads to XBLA certification in "next few weeks", out 2010

29 October 2009 | By Simon Priest
Developer Introversion reveals the long awaited arrival of Darwinia+ is "next side of Christmas", despite the studio begging Microsoft to ditch it in favour of Multiwinia.

Early multiplayer prototypes of Darwinia+ were trying to "satisfy Microsoft," which Chris Delay says is "the most awful motivation" ever to make a game. Darwinia+ is a redesign of the original.

"We had a lot of difficulty injecting any excitement into the game," admitted Introversion's Chris Delay, talking about the early multiplayer experiments, reports Eurogamer. "We were trying to satisfy Microsoft. That's the most awful motivation in the world for making a videogame."

Introversion separated the singleplayer and multiplayer by releasing Multiwinia, which scored high among critics. "Multiwinia for us was the best game with the highest production values we'd put out," explained Mark Morris. "That's what we believed."

"We were trying to convince Microsoft to kill the Darwinia idea and launch Multiwinia instead. All the time, Microsoft were saying to us, no no guys, we want Darwinia - we signed Darwinia," said Morris. "Alright, Microsoft, you're idiots, but we'll go with you."

In order for Darwinia to incorporate singleplayer and multiplayer, as Microsoft demanded, a complete overhaul of design had to be undertaken by Introversion, a "thankless task" they note.

Darwinia+ started in '06 and is yet to come out, which has been a major frustration for the developer. Let's hope all that hard work and prodding delivers something as great as the original, but for XBLA. 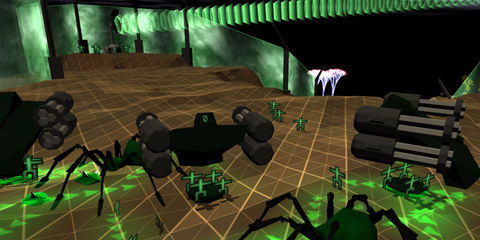