Insomniac: Framerate is "not on the same pedestal it was before"

30 October 2009 | By Simon Priest
Developer Insomniac Games has said how Ratchet & Clank Future: A Crack in Time will "probably be" the studios last 60 fps videogame, noting that "graphics should win" out.

Mike Acton reveals "hard choices" were made during development, between "higher quality" visuals and smooth framerate. Acton finds it "difficult to accept" but framerate no longer King.

"One of the long-standing sacred cows here at Insomniac is framerate. We've long viewed a solid framerate as both a sign of a quality product and professionalism as developers. It's always been point of pride in our work and considered an extremely serious part of our development process," posted Acton on the developer blog, reports 1UP.

"However, during development, there are hard choices to be made between higher quality graphics and framerate. And we want to make the right choices that reflect our commitment to providing you with the best looking games out there."

"To that end, our community team did some research into the question of framerate. The results perhaps confirmed what I've known for a long time, but found it difficult to accept without evidence."

Their team’s findings effectively conclude that framerate does not impact the reception with gamers in a significant manner, either in sales or review scores. Visual fidelity on the other hand does have quite the effect with greater graphics perceived as "more fun."

Insomniac now believes that framerate continues to be "important, but not critically so. When there is a clear choice between framerate and improved graphics, graphics should win. The correlation with review scores is clear." Acton explains what this 'revelation' will do...

"It means that framerate is still important to us here at Insomniac, but it's not on the same pedestal it was before. And that Ratchet and Clank Future: A Crack in Time will probably be Insomniac's last 60 fps game," he said.

Ratchet & Clank Future: A Crack in Time released exclusively for PS3 October 27th in the US, and will hit Europe November 6th. Hope you enjoyed it while it lasted - what matters more to you? 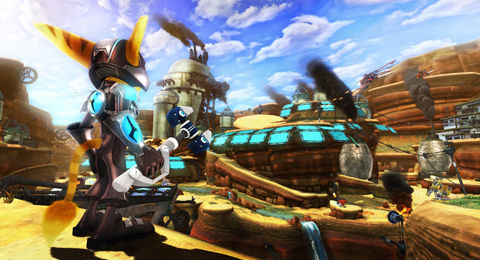