Scott Pilgrim DLC out in November 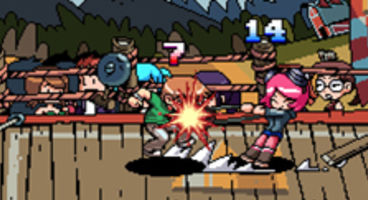 Ubisoft has announced that DLC is in the works for Scott Pilgrim vs. The World, where it will add playable character Knives Chau and 2 new modes.

This will coincide with the November 9th Blu-ray and DVD release of the Scott Pilgrim vs. The World movie. Game balance patch due as well.

Aside from adding Knives Chau, the DLC also features a free-for-all arena brawler with weapons and dodgeball, which isn't likely to be your standard school yard sport. It will be priced at $1.99 on PSN and 160 MSP on XBL.

A title update will also be releasing at the same time addressing game bugs, difficulty balancing as well as introducing local drop-in/drop-out co-op. There are still no plans to allow any online co-op or multiplayer. Sorry you'll have to have friends over instead.