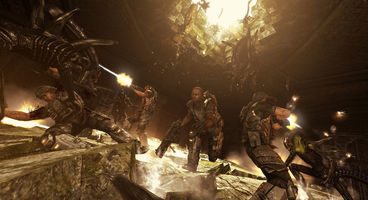 Update: The PC demo is now available to download from Steam. This has probably been released early because Steam will be having downtime tomorrow.

The demo gives players a chance to try out all three species – the Colonial Marine, the Predator and the Alien. Deathmatch mode is also playable on Refinery, one of the game's multiplayer maps.

"The team at Rebellion has created a truly immersive multiplayer experience with three completely different and compelling playable species. We believe that Aliens vs Predator offers gamers a unique alternative to the current FPS multiplayer games on the market, and sets a precedent for the evolution of multiplayer gaming in the genre," said Gary Knight, European Marketing Director of SEGA Europe.

"Multiplayer was a huge part of our original AVP game back in 1999, and we’ve kept the spirit of that classic experience in creating the multiplayer for our new Aliens vs Predator. With the demo now gamers can get to grips with each of the three iconic species so they can hone their skills and be ready for when the game launches and battle commences," said Jason Kingsley, CEO and Creative Director of Rebellion.

Aliens vs Predator releases for PS3, Xbox 360 and PC on February 19th In Europe.