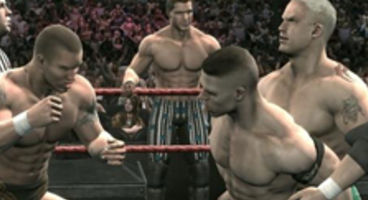 The legal brawls have been settled so now THQ and WWE are able to make sweet business with each other again - for 8 years at least.

A settlement was reached that rescinded all court petition stuff, and let them all avoid blame. Jakks Pacific gets $20m over four years from THQ.

"This agreement ensures that WWE games will continue to be an important cornerstone of THQ's annual release schedule for the long term," said THQ's Brian Farrell, reports GamesIndustry.biz.

"We look forward to working directly with WWE to expand their brand in the video game space through continued game play innovation and increased online delivery of WWE content." THQ and Jakks Pacific were locked into disputes over royalties.

"As one of the most successful video game brands, WWE is excited to work directly with THQ to translate WWE's colourful characters and ever-changing content into exciting and fresh video games for our fans," said WWE COO Donna Goldsmith.

THQ has coughed up $13.7 million to WWE and will fork out $20 million over a four year period to Jakks Pacific. All in all it means we'll be getting more WWE - that's great?