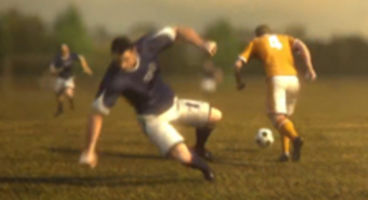 Publisher Ubi has announced it is to enter two more sports genres, skateboarding and football, with game releases coming this year.

Pure Football is a 5-a-side deal with no ref or any rules, featuring big names. 23 year-old Shaun White says his game will "melt minds."

If you like the idea of famous footballers running about fouling each other left and right, then perhaps Pure Football will appeal to you - basically then it's like normal footie but the pretence of order and 'sportsmanship' just fly out the window completely.

It avoids the traditional viewpoint of Football titles, so you’ll be playing in third-person "as opposed to the feeling of watching a TV broadcast", reads the press release. You can make your own player, with local four-player couch co-op supported.

Meanwhile professional snowboarder and skateboarder (obviously) Shaun White has signed with Ubisoft to slap his name and pretty face all over a whole new skateboard franchise, which promises "an innovative twist and fresh take" on this genre.

"We've been working on it for a while now and it's ready to melt minds," said White himself, reports Eurogamer. No specifics exist yet on the game but likely platforms will include Xbox 360, PS3 and Wii - much like his snowboarding title. Interesting to you?

Pure Football releases on next-gens most likely, this May. See the trailer.