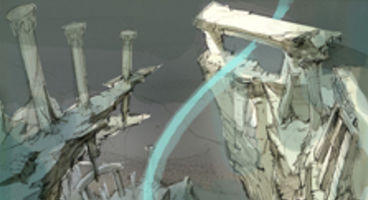 There was a whole lost city of Atlantis stage planned for PS2 God of War II but it was dropped due to "some high-level changes," scrapping all of it.

Senior level designer Jonathan Hawkins has now unveiled what it would have been and even voices a walkthrough. It's a full behind-the-scenes look.

God of War: Ghost of Sparta has released on PSP featuring the fabled lost city but "this isn’t the first time Atlantis was going to be featured in a God of War game," reveal Sony. "Back in 2005, Senior Level Designer Jonathan Hawkins was given his first assignment on God of War II – create an epic experience set in the fabled lost city of Atlantis."

"Unfortunately, after months of work, Jonathan’s designs had to be cut from the game due to some high-level changes. Afterwards, he went on to create some of the more memorable moments and puzzles in God of War II, such as the heart pounding Grapple Bridge sequence." This revelation is in tribute to the HD God of War Collection.

Check out the full video walkthrough from Hawkins.