Kinect manual leaked, do not "put the sensor on your console" 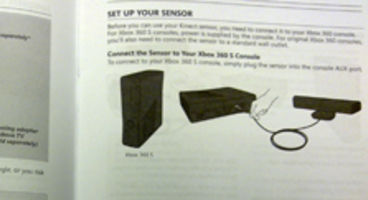 Microsoft's manual for Kinect has been splashed across the mighty Internet, revealing all kinds of official technical advice and recommended distances.

The Kinect sensor can see you "approximately 6 feet" from its lens, and for 2 players its best at 8 feet. It can't see you? Try different colour clothes!

Other interesting facts include the camera needing to be placed "between 2 and 6 feet (0.6 and 2 meters) high, the closer to the low or high limit the better." That's for the best play experience reads the manual. It advises against putting it on top of your console.

"For Xbox 360 S consoles, power is supplied by the console. For original Xbox 360 consoles, you’ll need to connect the sensor to a standard wall outlet," it says. A special power port exists at the back of the new Xbox 360 consoles for Kinect.

Should Kinect have trouble seeing you then "turn on lights to brighten the play space,” “try wearing different colored clothing that contrasts with the background of your play space,” and “prevent lights, including sunlight, from shining directly on the sensor."

It needs good ventilation as well, but not water or feeding - that would be silly. Kinect launches November 4th in the US and on the 10th in the UK. Fancy buying it?