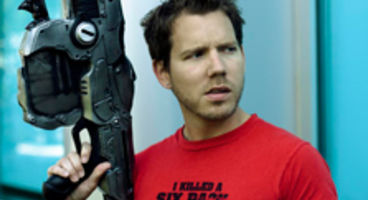 Tomorrow Epic Games man Cliff Bleszinski will be on the Jimmy Fallon show (it's a US thing), and is expected to spill major gaming beans.

It's heavily rumoured that this will be a Gears of War 3 announcement. Bleszinski says he should "bring something interesting" to the show.

"Thrilled to be on the show! Guess I should bring something interesting to show... :)" twittered the Cliffster, reports CVG. "I shall not say "bigger better blah blah" or carry any weaponry for the Fallon announce," he later added.

There's also a big chance it could be a People Can Fly project, namely the videogame being published by EA and believed to be named Bulletstorm. Are you hoping for a Gears of War 3 reveal tomorrow? The movie sure isn't going anywhere anytime soon.