07 May 2010 | By Nick Akerman
If you haven't seen it on TV, cage-fighting is one brutal sport. The UFC is the world's ultimate proving ground for those who think they're 'a bit hard', as the top fighters from all over the world pit their wits, and indeed their fists, against each other. That is, when they're not hanging out in a top London club with us, talking about the upcoming UFC Undisputed 2010 release. We were recently invited to get hands-on with the new title, in the presence of top British fighters Ross Pearson, Andre Winner, Terry Etim and Paul Kelly.

Our day started with a UFC-like sprint to the location- a marathon in the middle of London's bustling Picadilly Circus (marathon, five minute walk, same thing). After raising our pulses we sat down for a brief presentation of the game and an answer session with the fighters. Not wanting to tap into stereotypes, Winner's answer that he wants 'James Cameron' to win the election not only went down like a lead balloon, the entire press ensemble tittered wondering if he was being serious or not. Best not to make a fighter angry within ten minutes of entering the building, so the discussion was quickly ushered onto something more relevant. 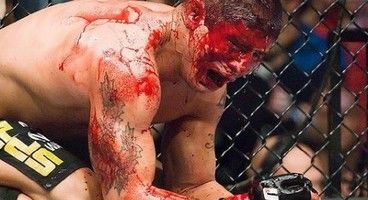 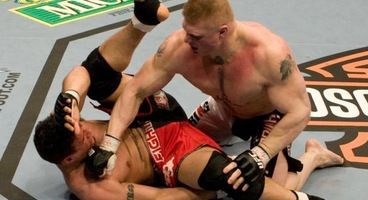 It's safe to say, UFC Undisputed 2010 has taken more than a leaf's worth of inspiration from THQ's WWE titles. The create-a-fighter and career modes are now massively improved, and feature similar styles of 'immersion' as the publisher's major wrestling series. The most obvious change is that your fighters will now be spoken about in the commentary between Mike Goldberg and Joe Rogan, as they muse about 'The Assassin' and other generic nicknames. Your created fighter will also have statistical limits depending on their weight, meaning there's no way a heavy-fisted, super-fast submission maestro can be produced.

They're also many subtle tweaks that'll help players create the fighter of their dreams. For one, the southpaw stance has now been included, opening a world of left-handed possibilities for those who complained last year. Furthermore, you can now choose your dominant hand- a subtle change that skilled players will use to their advantage in the cage. Just like when Dan Henderson sent Michael Bisping flying through the air when he caught him with a face-breaking right, you'll now be able to instil that fear factor into your opponents. Every move you choose for your fighter can also be customised from a set template, as WWE-like dummies show you exactly how the move will be performed at the big events.

On the visual side of things, minor improvements have been made to your fighters appearance. For one, long hair has been included for the first time, so if you want the blood-splattered and caveman appearance of Clay Guida after three rounds with Diego Sanchez, that can be achieved. The application of tattoo's also isn't so rigid, as you can twist and turn your preferred designs all around your fighter's body. Similarly, sponsors can also be placed into every buttock crevice or open patch on your shorts, meaning there's more room for personalisation here. The THQ developer's called it an 'elegant solution' to the cumbersome system from last year, we call it a natural evolution that should have been featured in the first place.

The main talking point at the event was the showing of the new career mode. Last year's affair lacked any real flair or longevity, even for fans of the sport. Things here are tailored towards the dramatic, as the series embraces it's 'Ultimate Fighter' culture more so than before. You'll start in the amateur WFA and will have to work hard to get into the UFC. We were shown a clip of Dana White inviting the created fighter to join the organisation via his video blog, and then were quickly told you can be kicked out of the UFC if your performances aren't up to scratch. If you fail to train rigorously enough, your stats will also begin to decline where you're losing pace. Before each fight it's best to analyse your opponent's strengths and put in place a gameplan that'll act as the basis for attack. You can bet your life they'll be doing the same, as your peers adapt to your fighting style throughout your career. Keep finishing opponents with a headkick? A top fighter will pick up on it and capitalise when you unleash. Finished every fight via submission? They'll do their best to keep the fight standing. 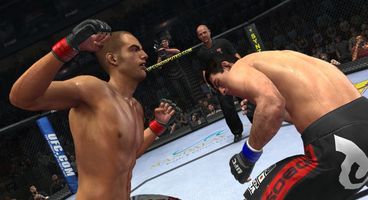 Of course, the second best thing about any fighting sport is the pre-match build up. This year has seen a huge overhaul to a system that barely existed in the previous game. You'll now have the chance to respect or disrespect your opponent at a weigh-in; a decision that will later be remembered in the cage. If you try to show them up in front of the press they could come out with a flurry of punches in order to embarrass you where it counts, or if you respect them, they'll try to take you down as honourably as possible (most of the time). If you've ever seen a live UFC event, the pre-fight interviews are also included in their dramatic black and white form. Although a little static, there was more than intrigue fluttering through the presentation area when we heard Quinton 'Rampage' Jackson spouting about exactly why he was going to kick our fighter's head in.

As we stood side-by-side with Britain's top upcoming fighters, anticipation filled the air. Anticipation for their next real-world fights, and anticipation for us to succeed in the only fighting career we'll ever know- in the game itself. UFC Undisputed 2010 is already proving itself as a more authentic, personal, and accessible title than the previous iteration. There was noticeable excitement on the faces of all THQ's staff that we met, and that speaks volumes about a series that is already doing for cage-fighting what WWE did for wrestling games. With a few weeks of tweaking time left, this release is sure to intimidate EA MMA's first offering, much like Etim and Kelly did when they stood next to us in the toilet.