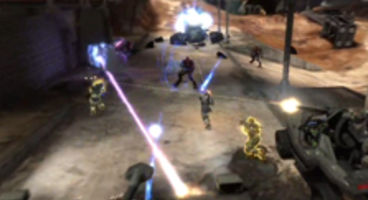 Fans now have 4 names to go with the 4 beta maps Bungie will be testing with in Halo: Reach, which are all human-themed to avoid the plot.

There are 2 party type maps, using modes like Headhunter and Slayer, with the 3rd hosting Generator Defense and the last remaining quiet.

Swordbase and Powerhouse are the party type maps, with Overlook featuring the Generator Defense gameplay. The last is Boneyard which right now has no official shots just some concept pieces - it supports the new Invasion gametype.

"It's kind of a cool nice, breezy outdoor space. I love the sightlines in it and I love the mix of indoor and outdoor combat that you get in it. It's quickly becoming my favorite in the Beta maps," said Bungie's Lars Bakken, speaking with IGN about Powerhouse.

"I like Boneyard which is completely crazy and probably one of the biggest maps we've done. I think we were inspired by the beaches in Bangladesh where they pull in those oil tankers and other big ships and cut them apart. We're doing that essentially with space frigates on Boneyard," added fellow developer Chris Carney.

There’s a ton more from the IGN interview with the Bungie Multiplayer Design Leads, so go and check it out if Halo: Reach beta is your thing.