Death not the end in Guild Wars 2 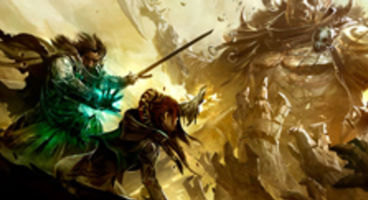 You gave it your best but those hit points of yours are gone, well no worries because Guild Wars 2 gives you some time to wreak your vengeance.

ArenaNet gives us the chance to come back, providing we kill our foe while our 'consciousness meter' still runs. No 'healer classes'.

You may be down but at least you're not dead - that's the thinking behind this new system, giving players a chance to get back up again if they manage to score a kill. A recent RPG title to use this system would be 2K's Borderlands.

You have a small window before death will completely take you. Any other class can resurrect you though says ArenaNet, or you can pay a fee to respawn at a set locale. Every class must heal themselves as the studio isn’t including a traditional style healer.

This is to stop users from placing greater value on "one profession over the other”, and should really help get groups together much faster.

"You could say instead of DPS/heal/tank, we have our own trinity of damage, support, and control, but we prefer to think of them as the variety of elements that create a diverse and dynamic combat system that gives each player a toolbox to work with to solve any encounter we might throw their way,” blogged Jon Peters, reports VG247.

As for the downed state - you'll of course be disadvantaged.

"Downed skills are less-powerful skills that a player can use in a last-ditch effort to turn the tide. A warrior might daze an enemy by throwing a rock. An elementalist might lock down their foe with Grasping Earth," continued the game designer.

"While you are downed, if you manage to kill an enemy, you will rally, returning to life to fight again. When you rally, you are thrust right back in the action. This potential to rally from the edge of defeat adds greater drama to combat and gives a player some tactical control while in a state where they normally have none."

"Some professions will have special skills that will instantly rally a fallen ally. For example, when a warrior uses "I Will Avenge You," and then kills an enemy nearby his fallen allies, his allies will rally," he continued.

"While you are downed or defeated, any other player can come to you and interact with you to bring you back to life. We call this "reviving," and everyone, regardless of profession, can do this starting at Level 1." This certainly flies in the face of the usual death system.

Does Guild Wars 2 sound like your kind of MMORPG, videogamer? Be sure to check out Peters' blog for more information on the sequel's healing and death mechanics.