Aliens vs Predator bonus DLC "available to everybody" post launch 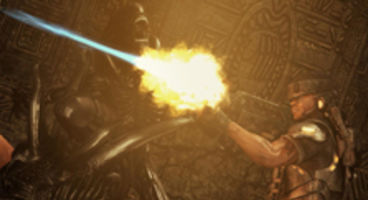 For gamers who can't quite afford those Hunter and Survivor Edition's of Aliens vs Predator, fret ye not, because their DLC will be up for grabs.

Day one content for Edition owners will be 4 multiplayer maps and 2 survivor maps, while everyone else has to wait. AvP is out next week.

"Downloadable content on day one for those who purchase the special editions will consist of four brand new multiplayer maps: two new Survivor maps and two for the other multiplayer modes," explained design boss Tim Jones, speaking with VG247.

"That will become available to everybody else soon after release. As for post-launch DLC, watch this space.” Oh you tease. Developer Rebellion has already expressed how super proud they are of all the violence, which is essential to the franchise they say.

"There are swathes of people that have waited a very long time for this game and there’s no question they’ll want something to remember it by,” he added.

“The special editions provide that something special. And I think the pre-order numbers we’re seeing demonstrate just how eager people are to get their hands on this game.”