PlayStation Move for Kratos only if not "hokey", Sony talks IP future 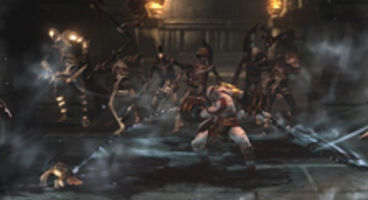 God of War III design director Todd Papy has vowed there to be no PlayStation Move support "if it feels hokey," revealing Sixaxis "didn't feel right".

The Santa Monica boss also revealed DLC "possibilities" noting for fans it's "very worth it," but it could "compromise" other non-Kratos projects.

"We’re talking about DLC, and the possibilities of it, to see if it’s worth for us to do it,” Papy said at a God of War III, reports VG247. “From a fan standpoint, I think it’s very worth it, but at the same time we don’t want to compromise our next projects."

"We’re gonna take a break, come back, look into new IPs, and at the same time we are going to look and see if there is anything left in the God of War series that we feel is very compelling that we can sink our teeth into, and get really excited about – then it will really translate well into the game and fans will be able to see that as well.”

Is the story of Kratos over? Has the trilogy nowhere to go?

“The story we set out to tell in the original God of War finishes with this one”, he added, “and that’s, well, that’s kind of where I will leave it for now."

“We’re gonna look and see how we can support God of War III, and we’ve got some ideas that we are already looking into and working on, but we’ll see if it ever comes to market." Those ideas might not include PlayStation Move support though...

"As far as the new motion controller, and the 3D tech coming out, we will just have to look at it and see,” said Papy. “We don’t want it to be hokey, so if it feels hokey, we’re not going to do it. I mean, we don’t have any SIXAXIS stuff in this game, which you know, it was one of those things that didn’t feel right for us."

“You just have to do what feels right for the game, and if it doesn’t don’t do it. Don’t force it. That is the way that we look at it.” God of War III releases exclusively on PS3 soon.