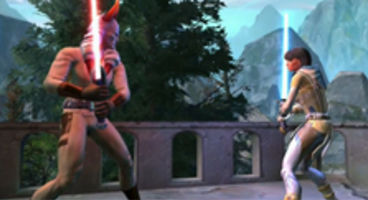 Developer BioWare has plans all laid out for the 'end game' period for the upcoming Star Wars The Old Republic due out early next year.

They "can't be more specific" at the moment though - well actually they could "but we won't." Narrative will have you going for a "really long time".

Ray Muzyka of BioWare, the boss no less, told VG247: “We have plans for end game, but can’t be more specific,” he said, adding, “actually, we can, but we won’t."

“But soon actually, it’s nice to be able to reveal things a little bit over time.” The BioWare team knew what they were getting into when they started the whole project way back.

“It’s been a long cycle, but we knew that going in and we’ve been very thoughtful about details. People who play MMOs want details,” added co-boss Greg Zeschuk. We shouldn't be thinking about 'end game' yet because there's so much before we arrive there.

“We have a story in place that will keep people playing and having fun for a really long time, and you should see the pillars we have describing to us what makes a great MMO or RPG for that matter, as they’re very similar kinds of pillars,” continued Muzyka.

“We look at narrative and story, we look at combat and conflict, progression, customization, all those have aspects that transcend the primary main game and all of them have place in the end game too.” Star Wars The Old Republic is expected for spring 2011.