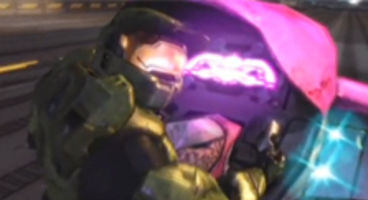 Developer Bungie admit that Halo 2's reveal at E3 back in 2003 featured a graphics engine too powerful for the original Xbox; ditched it afterward.

They went "through hell" to get it up for E3, but had to admit it was "never going to work" for the full game. It just "couldn't be played" with any tech.

"The graphics engine that we showed at E3 2003, driving around the Earth city... That entire graphics engine had to be thrown away, because you could never ship a game on the Xbox with it," Halo 2's lead engineer Chris Butcher told Eurogamer.

"Through putting ourselves through hell, we were able to do a five-minute demo of it, but after we came back from E3 we had to admit that this graphics engine was never going to work - it was never going to support the kind of environments that are really important for a Halo game." All their hard coding work had to be thrown in the bin.

"So we literally scrapped the entire graphics engine and started from scratch," he said. The E3 presentation created a hype monster almost unparalleled and one that needed to be desperately put back on a leash.

"We were building stuff that just couldn't be played, in any engine," noted Butcher. "We built, and detailed, and went a huge way down the path with a whole bunch of environments and levels for the game that just totally didn't make it."

"If you look at the level with the Flood, inside the quarantine area - that is the remaining 20 per cent of a gargantuan, sprawling level that was meticulously built and hand-constructed, but that could never, ever have shipped in any engine."

Have you ever seen the E3 2003 tech demo for Halo 2 on Xbox? Check out below that which never was... try not to weep over your keyboard.