13 January 2010 | By Richard Walker
Welcome to the second part of our interview with Splinter Cell: Conviction's Producer Alexandre Parizeau. If you haven't already checked out part one, you can read it here.

Here we cover why the initial direction was ditched, Fisher's inimitable gravel-tones provided by the ever-reliable Michael Ironside and the new dynamic AI. 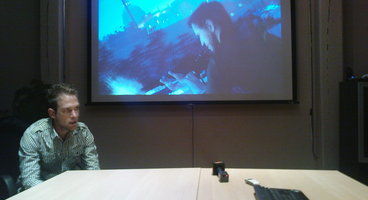 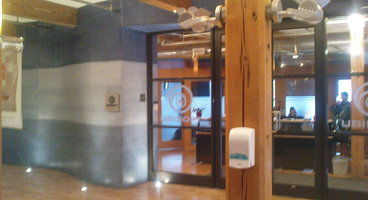 The Ubisoft Montreal lobby. Bit of useless trivia - the Ubisoft building is a converted textiles factory.

Strategy Informer: So you went away for a while and came back with a totally new build. What was happening in the development cycle during that time? Why was the decision made?

Alexandre Parizeau: You know how it is. When we started on this game about four years ago we had a clear goal of rejuvenating the brand, so coming up with something fresh for Splinter Cell and for the stealth genre. You know what happens when you try to innovate - you take risks. That’s always the case. So we tried to innovate on multiple fronts, from the technology side to the gameplay side and all sorts of different fronts, so we tried different things.

When we were about two years in, we had pushed innovation in a lot of different directions, so we had a crazy engine with lots of dynamic objects that could push light in a whole number of ways. The lighting in our game is 100% dynamic. You can shoot down every light. Every light is dynamic and will have an impact on the characters. That’s something I felt was a really cool innovation that suits the gameplay well that I don’t think any other game has done. We focused on the crowd stuff and we had pushed innovation on a bunch of different fronts. After two years when we looked at the work we had done, we felt that in some ways we had lost what the core of Splinter Cell was about. We had sort of strayed away from what the brand was.

We started looking at everything that we had and we needed something to ground those innovations so that they would make sense from a narrative perspective for Sam Fisher, for players and from a gameplay perspective. That was the sort of work that we did, and at around two years, we went quiet for a while and I think that - like I said at the beginning - the key anchor point that changed was Sam Fisher.

At this point we were like, “what’s going on in this guy’s mind? What’s going on in his life? How is he going to deal with his situation?” And that’s where the whole personal thing came through. We felt that it was a nice change for the franchise to show Sam Fisher leading his own investigation. He’s not working for Third Echelon any more after what happened in Double Agent. It really makes sense from a narrative perspective. That’s what we really want players to experience also. We want to know who that guy is. We’ve played that character for several games, but imagine what this guy has gone through. Imagine what happened in Splinter Cell 1, Pandora Tomorrow, Chaos Theory. He’s been all over the world, he’s been involved in conflicts where no one can even say he was there and help saved the world. While he was doing that he was comprising his family life, his wife died of cancer, his daughter gets run over by a drunk driver, he loses friends around him...that’s crazy, you know what I mean? His life was the military and the military rejected him after Double Agent. So what’s going to happen to this guy? It was really interesting to think and ground those innovations into what Sam Fisher had become as a character...as a person after Double Agent.

Strategy Informer: Was there anything in that early build that you couldn’t port over to what you have now that you kind of regret?

Alexandre Parizeau: Things were adapted. We had a lot of the grabbing objects and dragging them around, so maybe Conviction has less of a focus on that. We still have the technology with all the dynamic objects. You’ve seen when I get a guy, I can bash him around surfaces and stuff, and the surfaces will react. There is more of a focus on Sam’s weapons, gadgets and arsenal and dealing with situations than really grabbing objects. That’s really one thing we’ve put less emphasis on. We still have...but because we haven’t shown much of it some people think the crowd stuff is out of the game, but there are still portions of the game that will use some of that.

Strategy Informer: So how long is Splinter Cell: Conviction?

Alexandre Parizeau: Of course it depends on difficulty level and how you play the game and everything, but I’d say it’s going to be a good 12 hours. 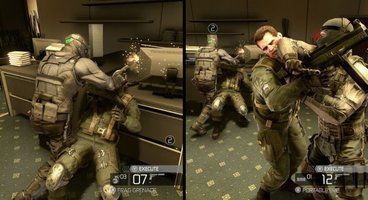 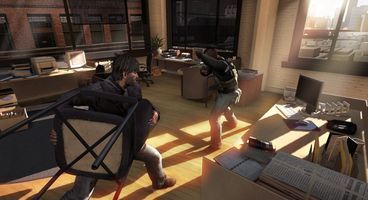 The original direction announced in 2007 featured a lot more direct manipulation of Fisher's environment. This has since been scaled back considerably.

Strategy Informer: Is the AI dynamic or are they set on paths? Is the AI aware of you?

Alexandre Parizeau: The AI is very dynamic. I am really proud with what the guys have done with the AI in the game. It is two things too because I think that AI is difficult in games. I think if it’s too intelligent, too dynamic then it’s going to kick your ass and it wouldn’t be fun. So you have to sort of balance it in a way where their behaviour is sort of predictable so you can learn their behaviours and become better at dealing with them, but that their reactions are realistic and that they don’t look like they’re putting themselves in positions where you’ll be able to take them out too easily. I think that we’ve struck a nice balance where the 'last known position' helps you predict sort of what’s going on and you can really build strategies.

It’s not too unpredictable and too realistic that you can’t build strategies, but they react to everything in the world and what you’re doing. So if you shoot down a light, they’ll go investigate it. If they see a dead body, they’ll freak out and start screeching and alert the other enemies in the area. They will investigate a noise and use their flashlight to scan areas with pipes and stuff to see if you’re around there. All those things work pretty well.

I’m really proud also of the voice over system for the AI; we’ve really fleshed that out and have a lot of different ones that are specific to the environment. Some are super funny and I really like the character it gives the enemy.

Strategy Informer: What sort of levels can we expect to see? Is there a lot of variation?

Alexandre Parizeau: Yeah there is a lot of variation actually and that’s something we were trying to focus on. I’d say part of it was kind of classic, there’s outside sections, underground sections and the warehouse stuff which is classic to Tom Clancy and Splinter Cell. The first level at E3 though showed public areas and you’re infiltrating a mansion, so it’s a different setting for Sam Fisher. There are a bunch of other ones that I can’t really talk about of course as well.

Strategy Informer: Michael Ironside is returning as the voice of Sam. Does he ever have any ideas or input?

Alexandre Parizeau: Definitely. When we work with him, we spend time outside of the recording studio talking and Max (Beland, Creative Director) and Sean (Stantek, Scripted Events Director) have spent time with him discussing about how the character’s portrayed and the lines and the dialogue that we’re writing. Michael has input for sure. He’s the voice of the character and needs to feel comfortable with what the character is experiencing and going through. So yeah, there’s definitely input from Michael.

Strategy Informer: Does he ever improvise lines and such?

Alexandre Parizeau: Oh yeah. What I love about Michael is that he’s the master of one liners. For a while, you work with temporary voices in the game whilst you’re in development because you want to record it when you know for sure that you need those lines and stuff and don’t want to waste his time. So we’re working with temporary voices and sometimes we have people from the dev team recording voices, so when we went to the recording studio and started having him (Michael) play out those lines and start putting them in the game - it gives you shivers. Sam’s back! Sam’s back! It feels really good.

All of those one liners, you know, those sarcastic sort of ironic one liners...he pulls them off so well. It’s insane. It would sound cheesy for someone else, but he nails it. 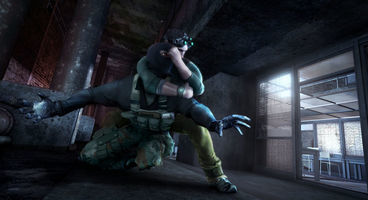 Stealth is still king in Splinter Cell: Conviction, but you have far more options than ever before. 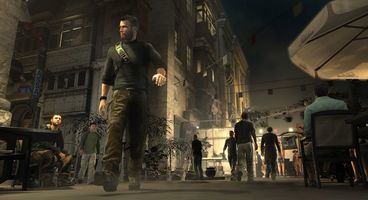 The crowd mechanic has also made it over from the old build of Conviction, so blending still plays a part.

Strategy Informer: Last but not least, what would you say was your favourite feature of the game?

Alexandre Parizeau: My favourite feature really is the gameplay and the pace of the game that we have right now. We’ve all seen movies where you see the hero do his thing and it feels really good when you master the controls and the features to really be able to feel like you’re in control of the situation. You’ve got all these guys who are unaware of your presence and you’re weaving in and out of the shadows using your things and you’re just hurting them so bad, but it feels really good. That’s my favourite thing, you know. Using mark & execute, using your gadgets to be the badass, be the predator and be able to remain concealed. They don’t know what hit them and from where it comes from. They’re just freaking out, but you’re like completely annihilating them and it’s a really good feeling.

Splinter Cell: Conviction is out in North America and Europe in April 2010.