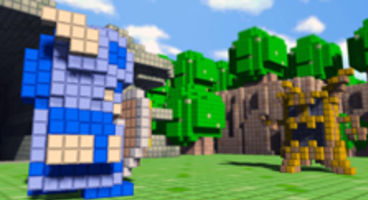 Finally our dream of seeing a 2D Kingdom evolve into a 3D world, and then beset by a fresh evil becomes a reality. Thanks '3D Dot Game Heroes'.

Gamers from the pop-tastic 80's will "fall to their knees and weep" when they see this "modern retro" release, hopefully in a good way.

"In fact, people who played videogames throughout the 1980s will fall to their knees and weep when they see Dot’s many homages to the games that defined their childhood (I’ve seen it happen). It’s a virtual trip down memory lane complete with swords, wizards and monsters." It sports very "simple pick-up-and-play controls" they say.

"...which hark back to a time when you didn’t need a load of buttons just to open your inventory, and a fun tongue-in-cheek storyline with plenty of links to the past..."

What's more is that we get to create our own "blocky hero," using the "straight forward and intuitive system" to make whoever you want. 3D Dot Game Heroes is out in May.