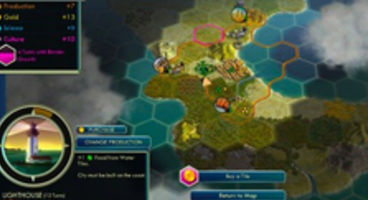 Right now there's a particularly glaring trade bug in Civilization 5 that ludicrously multiplies resources. Well the 2K developers are working on it.

Unfortunately they don't have a time frame right now as the patch list isn't complete. It will address online bugs, modding, AI, gameplay and UI.

The much requested Hotseat and Pitboss multiplayer modes "will be coming in a later patch," reveals 2K Games Community Manager '2K Greg'. See the upcoming changes below, however this isn't "necessarily the complete patch notes".

• Fix for production prompt that sometimes appears with newly created puppet states that could stop the player from being able to end the turn.

• Aircraft banner corrections – now when you rebase an aircraft, the number will move with it.

• Resource icons now come up with Ctrl-R again, instead of sharing the same button with Build Roads.

• Selecting a great general will no longer cause yield icons to appear.

• Fix for full-screen game when running dual monitors. Previously, the curser could scroll off the “open” side, and not be able to scroll the map in that direction.

• Misc additional fixes to mouse controls, and other interface issues.

• Rounded out financial information in the Economic Overview screen. Details now provided on the amount of gold provided by each city, the cost of buildings in each city, etc.

• Auto-populate save menu with save file name

• Workers - Added option to force workers to ignore manually made improvements (so they don’t change what you decide was best for a plot).

• Workers - Fixed bug where number of turns to complete were incorrect in build action button tool-tip.

• Economy - Fixed bug where players could disband a single unit, and not see the economic return until disbanding 1 more.

• Economy – Multiple fixes to the way trade-routes are tabulated and recognized.

• Economy - Can now sell Buildings in a city (to help lower maintenance for obsolete buildings later in the game).

• Trade – Found and corrected a Trade problem that could cause your Resource inventory to multiply.

• City States - Fixed a bug where you could not gift aircraft to city states.

• Workers – Priority of trading posts reduced, and rebalanced priorities on other improvements

• Save/Load – Fix for corrupted saves being experienced by some players in late-game.

• Map - Huge map crash-during-load fix that were reported on some specific systems.

• Map – Terrain caching fix that could cause problems for certain video cards (the “glowing red orbs” seen on the map are an indicator of this).

• Strategic View – Fix for selecting units either standing on a city plot, or garrisoned in the city plot.

• Tutorials – Many tutorial tweaks and adjustments.