US PlayStation Store update is here 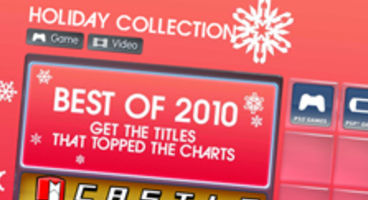 The PlayStation Store shelves in North America have just been stocked and this week there's a featured beta for SOE's DC Universe Online MMO.

Keep in mind that this is the US PSN update to the PlayStation Store as the EU one hasn't been posted yet. PlayStation Plus subscribers can get a full game trial of Prototype which has just had its sequel unveiled by Activision at the Spike VGAs.

See below for the full US PlayStation Store update.

Each year, we highlight the best of the best on PlayStation Store to make holiday game shopping easy. This year’s top-ranked downloads by the actual numbers for PS3, PSP, minis, themes and DLC are right here in the Best of 2010 Holiday Collection. Download the most popular titles on PlayStation Store and make it a holiday of great gaming.

Discover what lies beyond the edge of evolution. An all-new, 3rd person open-world/action game, PROTOTYPE puts gamers at the helm of Alex Mercer, a genetically mutated shape-shifter. With no memory and no mercy, hunt your way to the heart of the conspiracy which created you, making those responsible pay!

Join the DC Universe Online beta and become part of the next legendary game world.

Discover what lies beyond the edge of evolution. An all-new, 3rd person open-world/action game, PROTOTYPE puts gamers at the helm of Alex Mercer, a genetically mutated shape-shifter. With no memory and no mercy, hunt your way to the heart of the conspiracy which created you, making those responsible pay!

Experience the classic 1992 X-Men arcade game right in the comfort of your own home! Choose from some of your favorite classic X-Men characters including: Cyclops, Colossus, Wolverine, Storm, Nightcrawler, or Dazzler. Fight your way through hundreds of Sentinels and battle classic super villains such as Pyro, The Blob, Wendigo, Nimrod, The White Queen, Juggernaut, Mystique and the Master of Magnetism himself, Magneto!

In Prince of Persia Warrior Within HD, fight against an entire island of most brutal, unrelenting monsters who exist only to torment mankind, for the first time in HD and 3D.

Legend has it that once every 1000 years, a being of divine power takes physical shape somewhere in the galaxy. This time, he has taken form on the planet Danius. This being, who calls himself “Felden Crayce”, is being sought out by fighters across the galaxy to challenge until death.

Please Note: this game is a direct import from Japan. Although text is limited, the game is in the Japanese language. Help can be found at www.monkeypawgames.com

Express your inner goofball with this pack of wacky, yet adorable, clown outfits for your EyePet. Download the new Pack today!

Beware! Babu is on the stampede! This elephant rampages through the competition with ivory tusks in the air. Use 7 different Mod parts to create your very own custom Mod! Download this add-on today!

Downloadable Mix Pack featuring ‘Human Beat Box’ by Fat Boys VS ‘King Of The Beats’ by Mantronix, ‘Whoomp! (There It Is)’ by Tag Team VS ‘The 900 Number’ by The 45 King, and ‘Triple Trouble’ by Beastie Boys VS ‘Funky Cold Medina’ by Tone-Loc. For all song credits, please visit www.djhero.com.

Animus Project Update 1.0 is the first (and free!) DLC for Assassin’s Creed Brotherhood. Check out the trailer to see the new map Mont Saint-Michel set in France the new multiplayer mode – Advanced Alliance – in action.

nail’d is getting even more extreme! Check out the all-new Detonator Mode, four fresh tracks and new customizing options!

Continue your adventure as the Dark Apprentice, where you can forever change the history of the Star Wars Universe by executing Darth Vader’s orders to crush the Rebels as they mount their assault on Endor.

Grab a friend or go at it alone as Kain and Raziel from the Legacy of Kain games. The two iconic characters must work together to defeat a new threat in an unfamiliar world.

A huge (literally!) new playable character, Heart, will allow you to plow a giant path through the battlefield! Use Heart or other playable characters in 2 new missions where you must defeat 5 bosses on your own, or team up to battle 3 bosses and take ownership of a new food supply.

•Bill Joel The Hits: Rock Band Edition ($19.99) – Build your Rock Band library by purchasing this song game album: Billy Joel The Hits: Rock Band Edition. This pack includes “Big Shot”, “Captain Jack”, “It’s Still Rock and Roll To Me”, ” Movin’ Out (Anthony’s Song)”, “Only the Good Die Young”, “Piano Man”, “Pressure”, “Say Goodbye to Hollywood”, “The Entertainer”, “The Stranger”, “We Didn’t Start the Fire”, and “You May Be Right” by Billy Joel.

Race onto the digital grid with the Multiplayer Content Pack for TRON: Evolution! Includes the exclusive Codestream Nexus and User’s Plaza Multiplayer maps and the multiplayer skin for Sam Flynn, the only son of computer genius Kevin Flynn

Download this bundle of Comet Crash and Comet Crash: Bionic Swarm for a strategic adventure through 48 campaign levels and 30 battle maps and win up to 23 trophies.