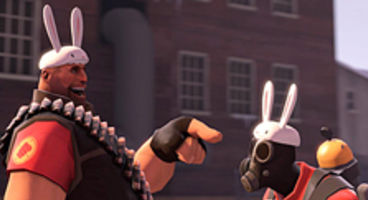 Naturally there's a catch though. For one week only you get specially themed Team Fortress 2 loot if you buy the latest Sam & Max episode.

Valve and Telltale Games wanted to do "something cool together," as they're big fans of each other’s work. There's a head and two guns.

"At Valve, we like to play games made by other people, mainly because a) we don't have to make them, and b) they're generally more fun than ours anyway," posted the dev team on the official Team Fortress 2 blog, reports Eurogamer.

"Last year Telltale Games' TF2 Team went head to head with us in the TF2 Studio Rumble tournament, in the process dominating our own Adrian Finol so hard that he made up an excuse about "picking up my kids somewhere" and went and sat in his car for an hour."

"After the match, we all agreed that one of these days we should do something cool together, because they're big fans of TF2, and we're big fans of getting advance copies of Sam & Max episodes." This special loot giveaway runs for just a week.

"We're going to give them out to everyone who buys The Penal Zone in the next week," they continued. Up for grabs is Max's Severed Head, Max's Pistol and Sam's Revolver. You'd best head over to the Steam store if you want the goodies.