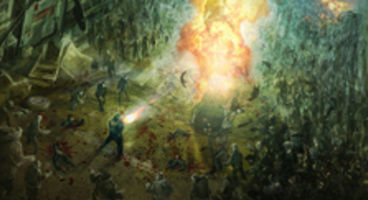 Housemarque's Dead Nation will release on December 1st in Europe through the PlayStation Network. It's out November 30th in the US.

It's got a metagame that "will pit country versus country" in a never ending "global battle for high score dominance" - world peace can suck it, right?

Dead Nation is an isometric shooter full of the undead that are in some serious need of eternal rest, which fortunately you can deliver via a large number of firearms and improvised contraptions. It has on and offline two-player co-op.

"We’ll be giving you an up-close look at Dead Nation’s metagame that will pit country versus country in a global battle for high score dominance and the ultimate bragging rights,” said SCEA producer Daimion Pinnock.

It's packing a "lengthy campaign littered with hidden treasures, hugely upgradeable weapons and armor, and tremendous replay value thanks to a host of difficulty levels." Dead Nation releases December 1st in Europe on PSN, and November 30th in the US.