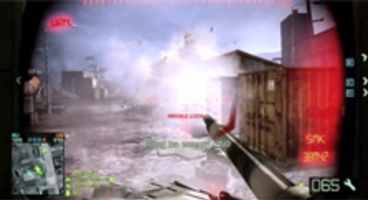 DICE has posted up the latest changes made to Battlefield: Bad Company 2, revealing a number of technical bugs fixed for on and offline.

The developers have also removed the SecuROM protection from the Steam version, as it doesn't have a disc and is thus altogether pointless.

Instead the Steam version of Bad Company 2 will just use the Valve DRM method instead, which makes sense seeing as how it's on Steam and all. There are still problems graphically with the game for some and it does need some more UI tweaks...

Overall DICE has taken a step in the right direction and hopefully they'll get round to adding more server filters options, as well as better server capacity support soon enough. Have you been enjoying the company of Battlefield's latest?

See below for the full PC patch changelog.

Fixed: Graphical issues on some systems on SP_03 (at start and when displaying background mountains at “Up river”)

Fixed: Unexpected dialog at start of SP_08 (only affected Italian)

Fixed: Clan tags that use numbers in them displaying a “0” on the Select Spawn Point screen

Fixed: No “Exit Game” menu option appearing at the end of some rounds.

Fixed: User is logged out when failing to create a new soldier

Fixed: Zu23 not appearing in stats

Change: New message for server full (reported as “I get no message when I try and join a server, it does nothing”)

Change: New message displayed for attempting to join a password protected server without providing a password (reported as “I get no message when I try and join a server, it does nothing”)

Change: All clan tags will automatically be preceeded by < and closed off with > to prevent impersonating other players.

Change: The STEAM version of Battlefield Bad Company 2 will no longer have SecuROM on the exe file. Instead it will use Valves own DRM instead.