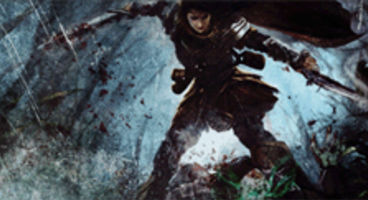 Developer Crate Entertainment is formed by many ex-Iron Lore veterans, the studio behind Titan Quest, and they've got a whole new game.

It's called 'Grim Dawn' and has mankind left royally screwed by two invading forces, one harvesting us and the other just killing us - nice.

This new title will use the Iron Lore engine that Titan Quest used and is partly funded by fans who have already pre-ordered Grim Dawn. "After crunching some numbers, it seems possible that with your help, we may be able to complete Grim Dawn without the need to seek publisher money," blogged devs on the Grim Dawn website.

"To that end, we've included a contribute section where you'll be able to help fund Grim Dawn by placing an early "pre-order."" Crate has also provided a detailed introduction to the world of Grim Dawn, and just how bleak humanities future is.

"Players will be thrust into the dark, war-torn world of Cairn where a once proud empire has been brought to ruin and the human race driven to the edge of extinction," they begin.

"Cairn has become ground zero of an eternal war between two otherworldly powers, one seeking to use human bodies as a resource, the other intent upon destroying the human race before that can happen. This cataclysmic war has not only decimated human civilization but is warping the very fabric of reality and, in its wake, giving life to new horrors."

"For humankind it is the dawn of a grim new age where iron has replaced gold as currency and the importance of salt as a weapon makes it far too valuable to waste on food. Small enclaves of human survivors exist scattered throughout the world, holed up in hidden refuges." Told ya it was pretty bleak- fortunately we humans are tough to kill.

"These humans have quietly watched the warring invaders destroy one another and have become wise to the strengths and vulnerabilities of their otherworldly foes. A few survivors have begun to exhibit strange new abilities after surviving possession or exposure to the warp. These unnatural powers are feared by some but give many new hope of launching a resistance to fight the "outsiders" and reclaim what's left of their world."

Sounds like your kind of adventure? If so you might want to consider donating to the Crate Entertainment cause by pre-ordering Grim Dawn through their website. Get the 'Legendary Fan Edition' and you'll be in the game credits.