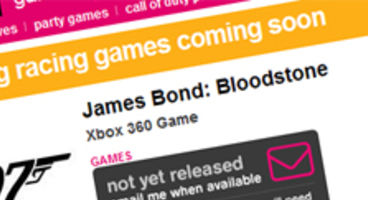 According to HMV's online store, James Bond: Bloodstone is the name of Bizarre Creations' super secret racing game in the Bond universe.

They list it as a 'driving racing' game, though whispers suggest it might have some first-person shooting too. It's for Xbox 360, PS3 and Wii.

Whatever this James Bond title is called it won't be tied to any movies coming out, especially as the upcoming 23rd Bond flick has been put on indefinite hold. GamesRadar reported that UK soap actor Adam Croasdell spilled beans last year.

"Oddly enough I have just played James Bond in the new James Bond video game - how weird is that?" actor Croasdell said, talking to the BBC.

"I don't know what the future holds, but I'm always into varying up what comes my way, trying new things. ... I think video games and the making of that type of technology, being in a funny one-piece suit and being shot with 60 cameras, I think that's sort of the future."

James Bond: Bloodstone - is that Bond enough for you? Whether this Activision and Bizarre title has just driving will likely remain secret until E3 this June. Thanks once again online retailers for blowing the tempers of publisher PR heads - always a joy. 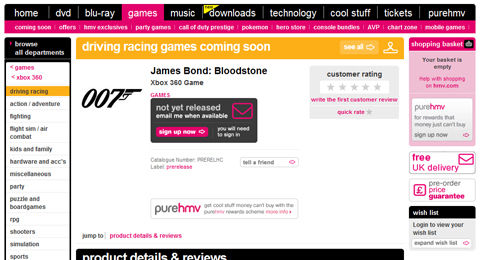