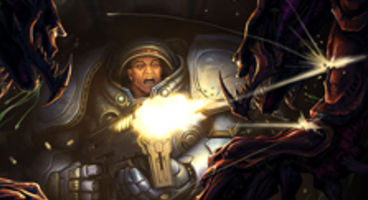 Blizzard has been forced to release an edited version of StarCraft II: Wings of Liberty after the original got slapped with an adults-only rating.

Now blood is black, not red, and all references to smoking and cuss words are gone. This edited copy gets an Age 12 rating, with Blizz happy.

"Since StarCraft II was originally developed to be a game adolescents could enjoy, we're very pleased with the Game Rating Board's decision," Blizzard said, reports 1UP. The studio is considering putting both editions on sale in South Korea.

StarCraft is a huge deal in the Korean nation with an entire e-sports market worth huge money operating annually, with players given celebrity status. Recently though the entire profession has been rocked with a gambling scandal over rigged matches.

At least 16 people have been arrested with top players and officials involved. Should more studios simply release both an 'adolescent friendly' edition alongside an adult-only one if ratings boards kick up a stink?