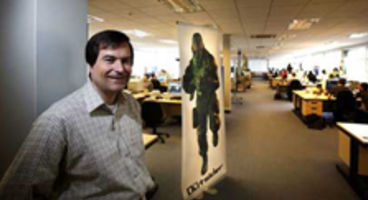 Our industry has a love/hate relationship with second-hand videogame sales, in that gamers love it for low prices and studios hate it for no profit.

Well some have come up with ways to get something out of it, like 'one-time codes' for multiplayer access or other content. David Braben has 6 ideas.

"There have been all sorts of statements about so-called pre-owned games, and quite a lot of people spouting hyperbole. To be honest I have been one of those people, but that doesn’t mean there isn’t a truth to it," says David 'hyperbole' Braben.

"If you don’t believe pre-owned is causing a huge dent in our sales, then look at the figures: In the US in 2008/2009 42 per cent of GameStop’s profits (as the biggest specialist retailer in the US) came from pre-owned game sales, and gross profit on pre-owned alone climbed to just under $1 billion," said the Frontier Developments' boss.

"It is no wonder supermarkets and corner shops are joining in the plunder." What then can we as an industry do to combat that capitalist menace? One-times code work, right?

"Our fragmentary response to the problem, one-time codes and so on, is in danger of reducing the incentive to keep them anyway, devaluing a collection if it is bound to numerous different accounts and codes, with no certainty that in the future these codes will continue to work." EA has Online Pass for activating multiplayer with pre-owned.

Braben offers 6 ideas we could adopt:

1. Carry on with the array of ad-hoc one-time codes, online ‘passes’, DLC, to tilt players toward new purchases.

2. Introduction of cross-industry serial numbering of discs. This shouldn’t mean the complete freezing out of pre-owned – it would be up to developers and publishers what to do – but it does give the option of a whole range of possibilities, including ones currently covered by the one-time codes.

3. Industry participation in pre-owned sales. This has to be with the retailers’ agreement, but this may come, as long as there is an upside to them, and that upside could be as part of holding off on the worse excesses of (2).

4. Bring in ‘Not for Resale’ SKUs. Why is there no parallel with DVD sales? It is because they do not allow resale or rental – and in fact have special ‘for rental’ SKUs at a significantly greater price.

5. Make the discs just data discs costing say, £5, perhaps containing an extended demo, but requiring online validation to become a full game (eg by withholding the executable file), even for the first user.

6. Move to online-only. This is where the retailers seem to want us to go after all, so perhaps it’s time to make the jump.

From tame to the extreme - say Braben, how's The Outsider going? "Whatever the tactic, let’s do something soon, and stop all the shouting about the unjust iceberg," he concludes. What's your take on the pre-owned 'nightmare' for the videogames industry?