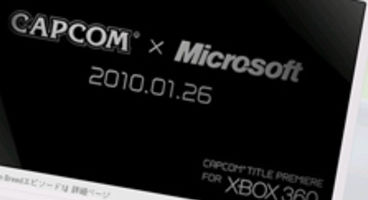 No hints exist as to what Capcom will be revealing to fans this Tuesday coming, January 26th, but we do know the venue and it's Xbox Live.

The Japanese Xbox.com website announced this impending reveal, meaning it'll obviously support Xbox 360 whatever it is. What could it be?

No idea. This isn't the first time Capcom has made such an announcement over Xbox Live, as they did it last year for Lost Planet 2 with producer Jun Takeuchi. Japanese gaming site Famitsu sounded the alarm to the rest of the world about this Tuesday.