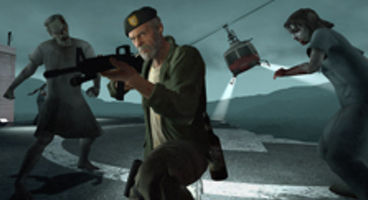 The upcoming add-on for Left 4 Dead 2, which mixes sequel and original survivors, has now got an official tagline - one that spoils surprise?

An add-on for Left 4 Dead is planned to 'synch' with the events of The Passing, reveals Valve's Chet Faliszek. Caution - a spoiler lies ahead!

For those who like narrative surprises then you'd best steer clear of this news article from this point forward... okay you've been warned enough. It's on you now.

The tagline that was revealed on GameTrailers TV by Faliszek is "Nobody Survives Forever", and yes it means what you think it means. Apparently the DLC add-on has the two survivor groups cross paths after one of the original has died, just afterward in fact.

An add-on episode for Left 4 Dead will release after The Passing where "one of you will have to do what happens, and one of you will die", said Faliszek. There, now you've gone and spoiled the surprise for yourself haven't you? For shame. Check the gameplay.