BBC reveals Doctor Who: The Adventure Games - City of the Daleks episode 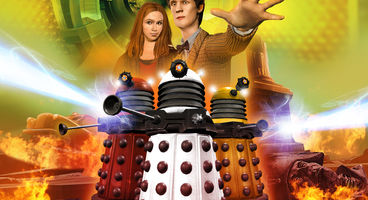 The TARDIS materializes in 1963 – and London is in ruins. The Daleks have seized control of time and the only chance of saving Earth lies in a desperate quest to Skaro, the Daleks' home planet – before time catches up with Amy, the last survivor of the human race.

Written by Phil Ford (Doctor Who: Dreamland; Sarah Jane Adventures) and executive producer Steven Moffat, episode one of Doctor Who: The Adventure Games is full of the TV show’s celebrated mix of action, peril and humour. Players will help the Doctor and Amy on an epic new adventure in an original story which forms part of the current series.

‘City of the Daleks’ features the new breed of Daleks which premiered on television in Saturday’s ‘Victory of the Daleks’. Nicholas Briggs provides the voice of the Daleks, alongside Matt Smith and Karen Gillan who recreate their roles as the Doctor and Amy.

“This is quite a series opener,” says Phil Ford, writer, Doctor Who. “We destroy London even before the credits role – so you can only begin to imagine where we travel to from there. City of the Daleks is as big-budget as you can imagine: from London we head to Kaalann, the capital city of the Daleks, one constructed from pure anger and hate. And these new Daleks don’t like to be messed with, so players are about to enjoy a new interactive episode which is as heart-pulsing as anything you’ve seen before.”

Doctor Who: The Adventure Games has been produced by a team drawing on the very best talent from TV and gaming. The interactive episodes are executive produced by Steven Moffat, Piers Wenger, Beth Willis and Anwen Aspden (BBC Wales Interactive), alongside Charles Cecil, one of videogaming’s most revered creators. The games are being developed by Sumo Digital, one of the UK’s best game designers. Stories and scripts are from Phil Ford and James Moran (Severance, Torchwood Children of Earth). The project has been commissioned for BBC Online by the Vision Multiplatform team, headed up by Simon Nelson, and is being driven by BBC Wales Interactive.

Doctor Who: The Adventure Games ‘City of the Daleks’ will be available to download for free from the Doctor Who website on June 5th 2010, for both PC and Mac users.

Check back soon for our full hands-on preview and an interview with the developers and people behind the Doctor Who: Adventure Games.