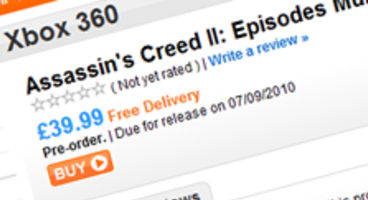 Retailers have ACII: Episodes at full price for September 7th for Xbox 360 and PS3. Ubi won't comment on these "rumours or speculation".

"We have not announced any release date or name so far about the next Assassin's Creed, following that we would not comment on rumours or speculation," Ubi told CVG.

Play.com has listed it as 'Assassin's Creed II: Episodes Multiplayer', with a September 7th date for both Xbox 360 and PS3 - selling for £39.99 in the UK. Are you interested to find out how Ubi plan on introducing multiplayer to the world of Assassin's Creed?