Sony converting "more than 50 titles" to 3D, has "massive names" 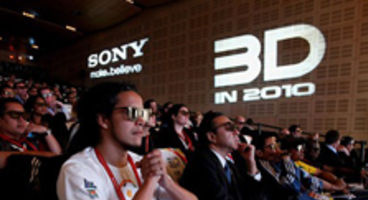 Stereoscopic 3D is the new craze for Sony and they've "more than 50" 3D-enabled titles in the works, including those already out among the masses.

Sony say it's a "very positive thing" to have so many show this "great level" of 3D interest among their studios. Some are "massive" IPs joining the fold.

"It's a very positive thing to see the great level of interest in 3D from our development studios," said Sony Europe's Mick Hocking. “We’re applying 3D to more than 20 internal games at Sony,” continued the studio director.

There are a greater number of external studios though embracing 3D which has Sony feeling all warm and fuzzy inside. “Overall we have more than fifty titles currently being converted into 3D, and this number is growing fast,” added Hocking.

"Some of them are massive names. That’s a really, really good sign that the industry is behind our unique message that 3D is a key element in the future of home consoles.” The corporations outpouring of support is winning over developers they say.

“We’re actively talking to developers and publishers, and we’re also offering training to them to help them get up to speed with 3D,” he said. “3D isn’t just about adding depth to a picture – developers need to know how to get the very best out of the technology on PS3 and we’ll ensure that they do.” Sony wants 40% of TVs 3D ready by 2014.

Killzone 3 is using 3D and planting explosives should give us a kick, apparently. "...the charge comes out of the screen and looks like it’s in the room with you, and honestly it feels like an explosive charge has been placed on your TV. It’s amazing!”

“Once people see the range of amazing content that 3D offers, they’ll make the decision to buy a 3D TV set.” 3D support was added to the PlayStation 3 via a firmware update. Sony has their own line of 3D TVs and stereoscopic glasses.