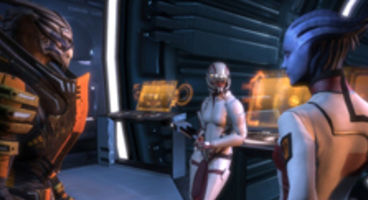 Project director Casey Hudson of BioWare confirms something we pretty much already knew, that Hollywood is salivating over Mass Effect.

Hudson says the team "don't just want" a movie to come out, they'd want "a great movie" - if such a thing was to "get done at all." They'll wait.

"Obviously we have a tremendous amount of interest from people in Hollywood to make a major motion picture about 'Mass Effect,'" Mass Effect 2's project director Hudson told MTV. "The most important thing for us is, we don't just want to see a movie get made. We want to see a great movie get made, if it's going to get done at all."

Mass Effect follows the story of Commander Shephard and his/her adventure in dealing with a hyper-advanced race of machines known as the Reapers. BioWare is in no rush to see something out the door in terms of a movie, they can wait it out.

"We're just looking at our options there, but waiting to make sure we have something really right before we do it." The developer is known for its large and well thought out stories in their videogames, often peppered with genuine surprises and twists.

Let's not get ahead of ourselves yet though as Mass Effect 2 releases this week for Xbox 360 and PC, with free DLC already waiting for those who snap up copies. Do you see a Mass Effect movie coming to the big screen? Who could play Shepard!?