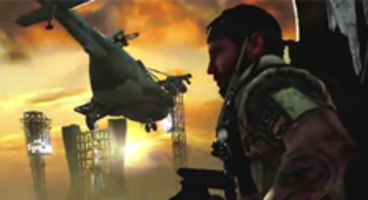 Lead character Alex Mason in Treyarch's Call of Duty: Black Ops was given a face and voice so the player can "relate to him" from the very first scenes.

This is a first for the Call of Duty series, to actually humanise the player avatar. We'll see "Mason's relationships" shift as we go "back and forth".

"It was a very deliberate choice," said Treyarch director Dave Anthony, referring to Black Ops' protagonist Mason having a reflection in the mirror and being able to speak.

"We want the player to immediately be able to relate to him. The first scene is very tense for the character. We thought that if the player himself was feeling what the character was going through right at the start of the game, it would really create a connection with the character." Mason recounts his Cold War era missions while being interrogated.

"The emotional focus that we've given Mason is more than we've ever done before for a character in a 'Call of Duty' game," he said. "As you go through the story, you will see how Mason's relationships with the other characters in the game change as you go back and forth from the interrogation room. You will actually realize how it all comes together."